Andrew Autio, freelance
Oct 4, 2016 1:39 AM
Previous Next
1 / 1 Mayor Steve Black (right) addresses council on Monday night, regarding the city's commitment of $3.5 million dollars towards an 8-day fireworks festival in 2017. David Whysall, a fireworks promoter from Niagara Falls sits on his left. Andrew Autio for TimminsToday
Expand
Previous Next

In a move that began polarizing the city on various social media sites as soon as it was announced, Timmins city council has voted to approve $3.5 million dollars for an 8-day international fireworks competition next summer.

Mayor Steve Black stepped down from his usual chair to make his pitch to council, and was joined by David Whysall of 'David Whysall Fireworks' from Niagara Falls. Behind them, the rest of the 'team' sat, along with former city Councillor John Curley, who has been actively involved in most of the city's fireworks events in recent decades. Councillor Andrew Marks, the current deputy mayor, kept Black's seat warm.

The event will coincide with Canada's 150th birthday next summer.

"Quite some months ago, they had approached me and asked if we'd be interested in possibly putting on an international fireworks show," said Black. "We're looking at having an eight-country festival."

He said negotiations with Britain, China, Finland, France, Japan, Ukraine, and the United States have begun to send fireworks teams.

The festival would begin on Saturday, June 24, which is St. Jean Baptiste Day, and would see the French team's pyrotechnic prowess on display.

"The first weekend, as it works, we try and start off the first couple days to be lower cost of entry, so as many members of  the community can get out, as possible" said Black.

Entry will cost $20 dollars, but kids under 10 will get in free of charge.

June 25-June 30 will see a different nation deliver a fireworks show each night.

$200 dollar passes will be available for all eight days of competition and musical acts. Tickets for these shows will range from $25 to $50 dollars. The finale will be on Canada Day, Saturday, July 1 and will feature a headlining act, which has been budgeted for an eye-popping $1,000,000 dollars.

"There's been some preliminary discussions, but we can't give formal offers and enter into formal agreements, until council gives the go ahead to do so. So we're kind of at that point now where the bands have had the discussions, there's interest there, but until they can be shown a formal offer, they won't agree to move forward," said Black.

Black says the acts throughout the week will encompass multiple musical genres, from pop, to country, to classic rock.

Tickets for the Canada Day show, depending on the mysterious headliners, will cost between $100 and $150 dollars.

"So we're really trying to encourage everyone to go out and get the week pass. If you're going to go for the main headliners, and the big expensive night, for another $50 bucks, essentially you get seven days access to all the other events," said Black.

He described the structure of the proposal to the 'major headliners' as 'low-risk'. The city would pay half of the act's normal fee.

"And then, if the festival does well and sells out, that fee would increase to what they normally would see for an event of this nature. So its been presented to them in a lower-risk, to try and maintain our financial security," he said.

Black expects the entire region, and possibly even beyond, to flock towards the city.

Black then admitted it was a 'very expensive' venture.

He presented some potential revenue figures, based on having at least 3,000 people at each night's events.

"The big night will be Saturday night, and we're hoping to have crowds of over 20,000 people on that night," said Black.

"There is an upside if things go really well, to make money on the event. That's kind of what we staged to the headliners," he added.

Whysall, a man with 50 plus years of fireworks experience, said the decision likely needed to be made on Monday night, to allow for adequate preparation time.

"The most important part of this is we need to do this as soon as we possibly can to make it work," said Whysall.

This is first time that the $3.5 million dollar proposal has even been mentioned by this city council.

Councillor Andrew Marks asked what would happen in the event of rain during the competition. Whysall replied that the only two things that will stop the show would be lightning or heavy winds.

"We work under all conditions. Rain, snow in July, nothing's going to stop us in that regard," he said.

"In fact, so optimistic that if council goes ahead tonight, we are putting this city at a risk. Taxpayers money is going to be at risk. I don't think anybody around this table was elected to authorize $3.545 million dollars with what we have in front of us," said Campbell.

All Councillors saw a list of potential performers. Campbell didn't mention any names, but said that one of the artists was playing Las Vegas, Los Angeles, Phoenix, and Minneapolis this week. Campbell doubts that performer would even come to Timmins, especially at a reduced rate.

"Mayor Black, I have real difficulty with this. I don't want to violate the code of conduct here, but I wouldn't vote for this in a million years," he said. 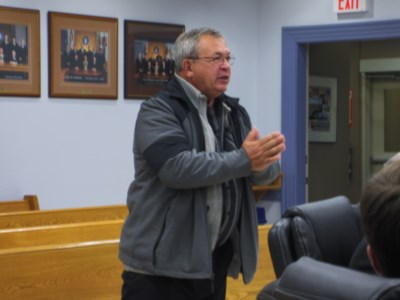 Councillor Rick Dubeau was not happy that this resolution was only drafted on Monday afternoon, and not included in the advanced agenda on Friday.

"I would have expected that this would have caused a lot of discussion within the community and the media, if the resolution had been attached '3.5 million for fireworks," he said.

City Clerk Steph Palmateer said 'plain and simple' that they didn't have the resolution drafted until Monday morning.

Councillor Joe Campbell requested that the vote be deferred until next meeting. Only he and Dubeau voted for the deferral, and so the vote went ahead.

How pandemic stress created new opportunities for this fishing lodge