Despite sewage bypasses, testing shows no adverse effects on water quality according to report

Facing mounting public criticism over the bypassing of sewage into an urban body of water, an item was added late to Tuesday's city council agenda.

Mayor Steve Black asked Environmental Compliance Coordinator Scott Tam and Manager of Public Utilities Steve Kukulka to come forward and address the situation at Porcupine Lake, in the heart of the east end. Sewage bypasses have become a regular occurrence and are legally required to be made known to the public.

Kukulka spoke first and gave council a background as to why the sewage bypasses are occurring. The sanitary collection, pumping, and treatment system in the South Porcupine and Porcupine corridor was installed in the 1970s, and has reached 'end of life'.

"Under certain precipitation events and Spring melt conditions, the six main pump stations within the system have received flows significantly in excess of their actual capacities which has caused both bypassing to the environment and basement flooding on occasion," read the report.

The city is under going a two phase approach, with Pumping Station Number 4 being phase 1, which includes equalization tanks, followed by upgrades on stations 1, 2, 3, 5, and 6 as phase 2. The new pump station at number 4 is expected to be operational in January 2018.

In 2011 and 2012, the city completed various studies and a detailed evaluation of the pumping stations, and later in 2012 implemented interim measures to mitigate risks. Additional pumps were added at all stations to bypass in case of excessive rain.

Tam said that the city regularly tests waters from Porcupine Lake during ice-free months since 2013 after receiving orders from the Ministry of Environment.

"In a typical year, it ranges from six to eight times a year," he said.

"Since we started doing that, there's been no observed negative impacts on the water quality. So it's possible that some of the sewage that bypasses does get diluted," said Tam.

The city report said that a review of the data shows the trend to be "quite stable and in most cases continues to be downward trending, indicating stable and/or improving water quality."

"I'm not going to say that nothing exceeds, the odd 'exceedence' is observed, but there's no consistent trend," said Tam, who added that the quality will improve further with upgrades to the pumping station.

Councillor Pat Bamford, who represents Porcupine, was the first member of council to respond. His major concern was for residents of Bristol Road who have experienced regular flooding in recent decades thanks to sewer backups.

"I'm concerned that the pump stations are upgraded for environmental reasons and the quality of Porcupine Lake, but I am more concerned, and dismayed somewhat, that the reservoirs have taken so long to get in place. I hear it in my ear all the time. So I'm hoping that this moves along, and the reservoirs are in place in January 2018, for the spring run-off, and that everything is working," he said. 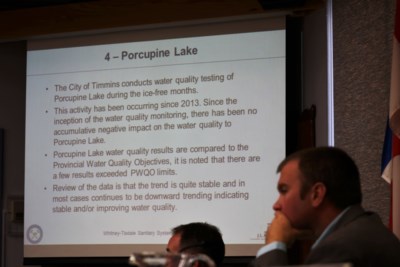 Mayor Steve Black listens to the presentation from Tam and Kukulka at Tuesday's meeting. Andrew Autio for TimminsToday

Bamford also said the city should be focusing efforts as soon as possible on Bob's Lake lagoon, which is a rectangular open air sewage treatment pond on the southwestern edge of Bob's Lake created in the early 1960s. Between 50 and 70 homes still have their sewage flow into the lagoon.

"Because there is raw sewage that is overflowing from that lagoon down Bob's Lake Creek, into Porcupine Lake, so that's not a good thing. When you have heavy storms as we're getting now, which is par for the course with global warming, our storms are overwhelming sometimes. So the sewage lagoon is going to be overflowing on a regular basis."

Final completion date for Phase 2 of the Whitney-Tisdale pump station upgrade is targeted for July 2020.

Simple on-demand snow-clearing with no contract, now available in Timmins