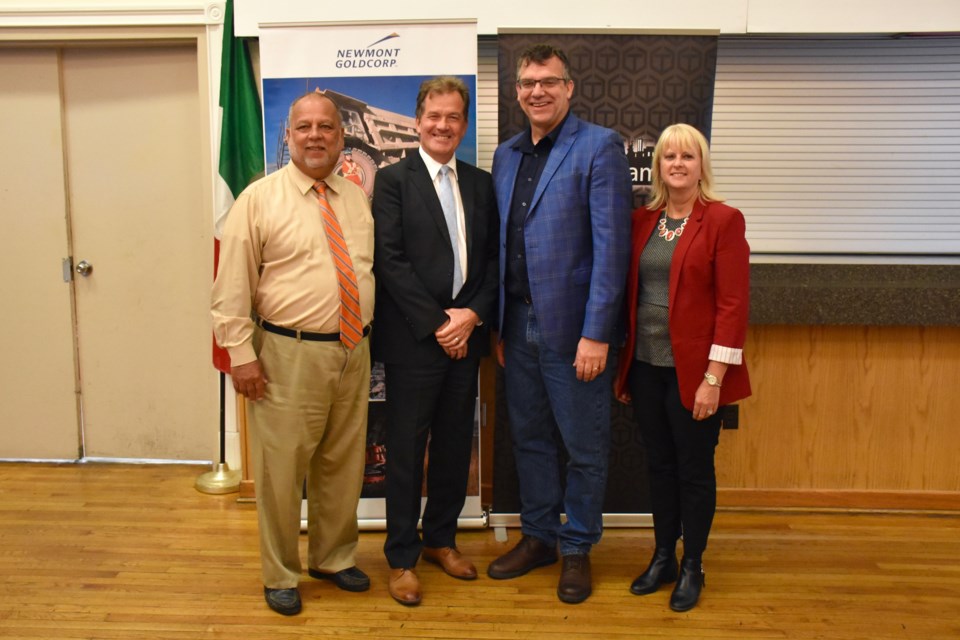 From a public lookout of the open pit to the Newmont acquistion and where the Century Project is at, everything was on the discussion table for Marc Lauzier today.

Lauzier is the general manager of Newmont Goldcorp's Porcupine Gold Mines and was the featured speaker at the Timmins Chamber of Commerce's quarterly Inside Their Business event.

Earlier this year, the $10-billion merger of Newmont Mining Corp. and Goldcorp was completed, creating a new company - Newmont Goldcorp.

The local operations involved are the Porcupine Gold Mines, which includes the Hoyle Pond underground mine and Hollinger open-pit. Borden Lake near Chapleau is opening this year and is an all-battery-electric mine. The Century project is also still in development.

Because the acquisition is still fresh, Lauzier said they're in a phase of getting an understanding of how Newmont operates.

"For the time being we’ve operated status quo and there hasn’t been much change to the operation, so we’ll continue to operate as responsibly as we can in a sustainable manner as we always have. It’s the same management team, we’re going to stay in the community and do the best that we can,” he said.

During his presentation, Lauzier gave an update on the local operations and answered questions from the audience.

For the Century Project, a potential large-scale open pit and processing facility, he said they're still working through it.

“The problem with a project like Century is...you’ve got a very low-grade resource that you’re trying to mine and you need a lot of capital to do it. It’s not easy to get that money,” he said.

Right now, Lauzier said they are running through scenarios to determine what is the most viable option, whether it's working with the Pamour or Dome, or both.

“We’re trying to find what the combination is that will mean we can borrow the money and get the best rate of return,” he said.

At the Hollinger open pit, the goal is to be finished operations in the first half of 2023.

Once those operations end, there is reclamation work to do.

In the pit, he said right now there are 10 benches and there are 20 benches left to go.

As they mine deeper, he said there should be less disturbances with noise and dust in the area.

If you want to get a look of the open pit, the lookout should be open briefly this fall.

It will be on top of the berm that can be seen from Hollinger Park and people will be able to drive to the top, making it fully accessible.

“We’ve had a lot of challenging issues there, so the lookout will be finished at the end of this season. There’s been a lot of delays, but it will be ready for next year to use completely, but we’ll open it for a week this fall and then we’ll close it for the winter months and re-open it for next summer,” said Lauzier.

Work is still ongoing at Hoyle Pond, as well.

Because they're done working in the highest-grade zone, Lauzier said the grade is dropping as they return to what was in the upper mine.

“We’re mining narrower veins at slightly lower grades and the trick for us to be sustainable for Hoyle is to switch to long-hole mining because we have to lower our unit cost per tonne. And as long as we can do that efficiently, then I think we’ll be able to keep going for a while,” he said.

Borden Mine near Chapleau is also getting ready to open.

He said most of the staff is in place for the mine, which boasts a small footprint, and the mining is being done by local contractors.

BEYOND LOCAL: Designing artificial brains can help us learn more about real ones
Feb 23, 2020 9:25 AM

Good morning, Timmins!
Feb 23, 2020 6:00 AM
Comments
We welcome your feedback and encourage you to share your thoughts on this story. We ask that you be respectful of others and their points of view, refrain from personal attacks and stay on topic. To learn about our commenting policies and how we moderate, please read our Community Guidelines.