It won't be long until a dream will come to fruition as the city doubles its number of microbrewery operations.

For the past three years, Kevin Patriquin and his partners have been working on Compass Brewing, a startup enterprise located on Riverside Drive in the city's west end.

He has been a pretty serious home brewer since 2012, when his brother-in-law introduced him to the hobby.

"We started off with kits you buy at the grocery store. It's just basically molasses goo stuff that you mixed in boiling water, and it was just, kind of odd tasting, so we need to improve our strategy."

Several years and countless batches later, they have a sizeable portfolio of beer recipes which are enjoyed by family and friends. However, after reminiscing about the city's defunct Doran's brewery, which was demolished in the early 90s, Patriquin began seriously considering making it a business venture.

"It was time to step it up a bit. We did some surveys and market research to see what Timmins was all about in terms of beer drinking. What styles they want and like. After that we took about a year to do the business plan. After that it was more about funding coming in, so that took a bit of time," said Patriquin.

One of the biggest hurdles to clear was finding a suitable location.

"It took a good year for the building to come up, where we're at now. Nothing was coming up. The city was giving us issues with where we can go and where we can't. There's a lot of red tape involved."

Eventually they found a 3,000-square foot location in a busy commercial area. The brewing equipment was ordered last March, and arrived near Halloween.

"We've been setting up ever since, and now we're waiting on permitting."

Patriquin and his partners, Mael Girard, Corey McLister, and Joel Bradette all work at the Kidd Mine full-time. Girard will serve as the brewmaster.

In the summer of 2015, at a private, yet sizeable party, the team offered free samples to friends of family of different recipes they were considering producing at a larger scale.

"A lot of the recipes that we have now were developed from the input received from that event."

As a home brewer, Patriquin has experimented with flavours such as maple, pumpkin, birch syrup, and has even brewed a batch of his own root beer.

He has even received a request from Crimson Dawn, the local Klingon organization, for a custom brew.

"When Leonard Nimoy passed away we made a beer called 'Live Long and Prosper', it was a cherry nut brown ale aged in oak. They (Klingons) asked us to make them a spruce tip beer. We haven't gotten around to it yet, because we've been busy, but it's something we can make. We're always into collaborations with the public, we're about community," said Patriquin.

Compass Brewing will have three flagship beers, starting with a Belgian style ale called 'La Grisette', which is heavily associated with mining.

This style of beer was originally brewed for miners in the Hainault Region of Belgium sometime in the 1700s, who usually ended the day covered in grey quarry dust. Women took over most of the brewing duties during this time.

"They would serve the men after they would come up, and they'd wear grey uniforms and were called 'grisettes'. It was a thirst quenching beer, lower in alcohol so the miners would be able to go back to work the following day," said Patriquin.

The third variety is a Session IPA, called 'Polar Day'.

"A little more tropical, more flavourful. So you're getting an IPA, but at a lower alcohol." 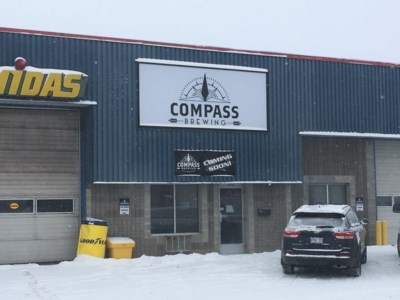 There will be eight taps in the tasting room, which will be known as 'The Refuge', an ode to underground mining, which will also include temporary and seasonal offerings. The three flagship beers will be available for take-home purchases in cans, growlers, and kegs.

Located in a plaza known as the Timmins Auto Mall, and just down the road from the Timmins Square, Compass Brewing will add a new dynamic to a predominantly commercial area.

"It is a very busy location where we are geographically on this side of town. We'll be the only place where you can buy beer in Mountjoy, which is good in a sense. There's four lanes of traffic, with a turning lane, so it's easy to get in and out."

He expects brewing to be underway before the end of the month, as they are awaiting the final provincial permitting. After that, it will be full steam ahead.

"It's going to be a very interesting year, knowing that there's a bunch of events and festivals coming up. Will we make the cut? Will we get in? Who knows? We have to prepare ourselves for it," said Patriquin.

Some Sealtest milk recalled because it may contain sanitizer
Jan 25, 2020 8:59 AM
Comments
We welcome your feedback and encourage you to share your thoughts on this story. We ask that you be respectful of others and their points of view, refrain from personal attacks and stay on topic. To learn about our commenting policies and how we moderate, please read our Community Guidelines.

Andrew Autio is a journalist based in Timmins. He covers city hall, community events, and interesting local stories.
Read more