BEYOND LOCAL Why more adults kids are supporting their parents

According to Judith Cane, a money coach based in Ottawa, more adult children ranging from their 30s into their 60s are offering monetary support to their parents
Mar 4, 2019 8:55 PM By: Global News 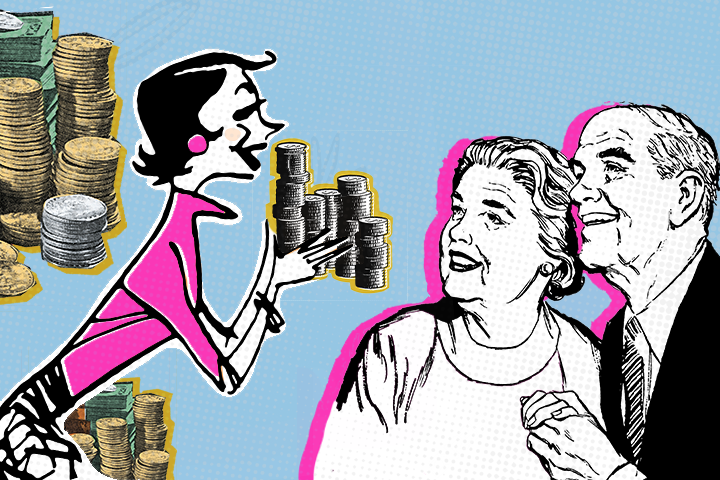 There’s a common narrative that many adult kids are still receiving financial support from their parents.

A recent RBC report found that 96 per cent of parents with kids between the ages of 18 to 35 have supported them in some form financially in their adulthood, either paying for their rent or covering their bills.

But some adult children — ranging from their 30s into their 60s — are in the opposite situation, and offering monetary support to their parents. In fact, according to Judith Cane, a money coach based in Ottawa, this situation is becoming more and more common for Canadians, especially for people with parents in their 70s.

“Parents want to stay in their home, but they need extra care [for things] like getting showered, rides to appointments [and] housecleaning,” she said to Global News. “Others need to go into a care facility, so the adult children are supplementing the monthly cost.”

Why are more parents leaning on their kids?

Rick Peticca, a lawyer at Shulman Law Firm in Toronto, says that the increase in older adult divorces is affecting people’s financial stability. In Canada, about one in five adults in their late 50s have split from their spouses, based on the latest government data.

This trend of baby boomers divorcing later in life is often referred to as “grey divorce.”

“Obviously, if [someone has] gone through a divorce, they may have suffered some financial loss going through it with the division of assets,” Peticca told Global News. “And they need to, at times, rely on their children to assist [them] after the fact.”

Cane agrees, and says that when adults in their 60s or 70s divorce, their financial stability is often compromised — especially if they’re on a fixed or limited income. “[If] they have a fixed income, and you’re splitting up assets, there just isn’t enough money to go around,” she explained.

There’s also the financial burden of aging. Cane says that the cost of taking care of older parents is also eating into children’s bank accounts. If someone does not have enough money put aside for their own retirement care, it’s often on their kids to cover housing or medical costs.

“It is so expensive to have your parents live in some kind of retirement community … especially if they need dementia care,” Cane says. “People are having to pitch in with their siblings to pay for it.”

In what ways are adult children offering support?

Like Cane mentioned, paying for one or two parents’ retirement housing is costly. In Canada, these facilities can cost anywhere between $2,000 to upwards of $5,000 a month. For kids who can’t afford it, they often have no choice but to have their parents move in with them.

“I’ve definitely seen kids who have brought their parents into their house because there just isn’t [enough] money to house them,” Cane said. “Not everybody can afford to pay for their own expenses plus help their parents out.”

In other cases, financial support means children giving their parents money to cover bills or housing costs. Cane says kids may also be stocking their parents’ fridge, or paying for living expenses where they can.

“It’s just the little things that add up that kids are starting to have to contribute to,” she added.

How is this affecting adult children

The financial burden of supporting your parents can be taxing. If you’re comfortable enough to be able to offer monetary support without significantly affecting your own living situation, there may be less strain on your bank account.

But for adult children who are not in that position financially, the costs can add up. Cane says she’s had clients who’ve been eligible for retirement but can’t because they’re supporting a parent.

This can put pressure on people professionally, as supporting a parent makes the risk of a job loss more severe. “If you’re trying to support three generations … you got your parents, your kids and you … losing a job can be a huge, significant problem,” Cane said.

Then, there’s the personal strain caregiving can bring. When it comes to siblings, tension can occur if one kid feels they are supporting their parents more than their brother or sister is, especially if a parent has moved in with them.

On top of relationship issues, feuding over money — and how much each person is chipping in — can cause a divide. Cane says it’s best to have a conversation with siblings to make sure everyone is on the same page, and get an agreement in writing if necessary.

What adult children should be aware of

Lawyer Peticca also warns that adult children should be cautious if their parent has remarried or re-partnered. In these cases, offering financial support to the parent means their new spouse is often entitled to half.

“Once the money is given to the parents from the adult child, they are free to do whatever they want to with that money,” he explained.

“If they’ve remarried, then that money [may] either get put into a joint account, or become jointly distributed with that person in their lives. If something should happen with that [parent], effectively, that money is going to be divided with their new partner.”

To combat this and avoid potential issues, Peticca says it’s smart to get a cohabitation agreement or marriage contract. This means that the parent could clearly outline that any money given to them from their own child is their’s  — and only their’s — should a death or divorce happen.

At the end of the day, Cane says it’s important to be open and honest with your family about money.

“Everybody has to be open about what the financial implications are… and it’s not just about the money, but who is going to take the parent to doctor’s appointments and is there going to be respite care for the person who is taking care of the parent,” Cane said.

“The kids need to get together … and make a decision that everybody can agree on.”