"Its been nine months. A very long race. The plan from the beginning was to build this in a coherent manner. The first step was to build teams across this country. So we did heavy touring, and we established local ground teams across the country. We built on that base. We went through national debates, in every region of the country, and now we're at the time when we're about to pull the vote," he said.

A total of nine official debates have taken place since March, with one final debate to be held on Sunday in Hamilton, Ontario. On Monday, first ballot voting begins by mail and online. First ballot voting ends on Oct. 1. Only registered party members can participate.

Angus noted there is an 'enormous opportunity' in front of him, and due to the hard work of his grass roots teams, he is in an 'excellent position.'

"We're going to be travelling a lot more. We have a lot of work to do, but we're feeling its really positive. I want to say that here, in the North, people are motivated to vote. We are counting on Northerners to get out to vote. People are getting their ballots in by mail. Let's get this vote happening because we can win this from the support that we have across the North, and other regions." 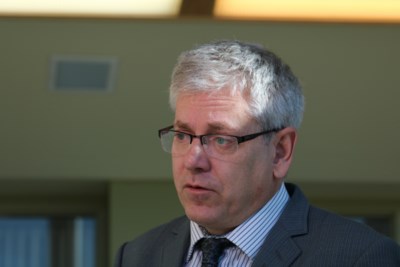 As is often the case in federal politics, the province of Quebec will play a prominent role in deciding the outcome of the next election. Angus, who has been working to improve his French, and offered most of his comments on Tuesday morning in both languages, said he will make 'La Belle Province' a major priority if he wins the party leadership.

"What's really important for us to recognize about the importance of Quebec right now, is in the race itself, the number of voting members has been small, but the potential is enormous. Our ability to win back seats across Quebec, to me, is going to be the path to victory in 2019. Certainly, as leader, building that chain back up that Jack (Layton) built, will be priority number one. Because I have a reputation in the West, we have a strong team in British Columbia, we are really strong in Ontario, but I have been talking with the candidates in Quebec, I've talked with the young activists. If we put the efforts in, we're going to come back very, very strong, and I'm very pleased with the work Guy Caron (fellow leadership candidate) has done in Quebec. I think, talking to the base, they are waiting for a leader to come and say 'we're going to make this a priority."

Angus added that he has received positive feedback from lifelong Conservative and Liberal voters as well throughout his travels across Canada during the campaign.

"We had an open door. That was our attitude the whole way. Let's build a team, let's build on that Northern spirit where people do come together."

Second ballot voting wraps up on Oct 8, and the new federal New Democratic Party leader will be known by Oct 15 at the latest. A federal election will take place in the fall of 2019.

Can people in Timmins travel while on long-term disability?

Local author highlights the importance of faith during times of adversity