Andrew Autio, freelance
Jul 29, 2017 5:28 PM
Previous Next
1 / 1 Enfield, Nova Scotia's Classified did everything in his power to engage the audience on Friday night at Participark. Andrew Autio for TimminsToday
Expand
Previous Next

The sophomore edition of the Timmins Festival and Events Committee's flagship event 'Rock on The River' kicked off on Friday evening at Participark in Mountjoy.

"We were super stoked. The attendance was double compared to night one last year," said Ryan Daly, TFEC's Director of Community Relations.

"Its awesome that people are aware of what's going on in the community, and coming to support these events and support TFEC, and just going out to see some live music. Its amazing to see the turnout," said Daly.

The night began with a performance by James Bay coast rockers Midnight Shine and was followed up by budding pop star Tyler Shaw. Thunder Bay's Coleman Hell pumped up the crowd in impressive fashion before the evening's headliner Classified.

The Juno Award winning rapper from Enfield, Nova Scotia masterfully connected with the audience in his first ever performance in Timmins. He brought a member of the audience up on stage with him, who took a selfie, and then dove off the stage into the audience. Another crowd member was brought up to provide some backing vocals and partake in a 'jazz cigarette'.

A big shakeup occurred halfway through the set, when Classified noticed a bit of a gap in the crowd between the front VIP section, and the general admission area behind that. He asked security to allow the general admission attendees to come forward as close to the stage as possible for the remainder of the show to improve the atmosphere, which prompted a flurry of action. Security and police had to rush to keep things civilized.

"It was kind of a bittersweet thing. We were talking about it afterwards, and we're all music fans. You know, if we were at a show, we'd be trying to get through and everything as well, and hop the gates. We love that Classified got the crowd into it, he got everyone engaged, everyone was having a blast. The main thing is that the VIP is licensed, and its 19 plus, so we legally can't have children in there, and kids were hopping through. That was a big concern. It was just getting the kids out of there, then we kind of let everybody have some fun. But the security really stepped up and helped us out, and tonight we're going to have extra measures in place to make sure that people who bought VIP will be the only ones in the VIP area. We have to respect the people who paid the extra money, and bought their tickets ahead of time," said Daly. 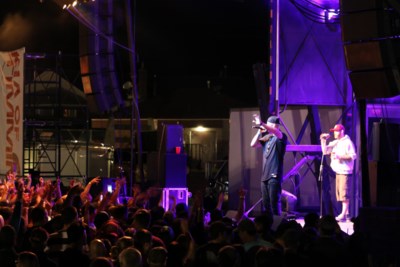 Classified provided locals with some hip hop flavour that was lacking at Stars and Thunder. Andrew Autio for TimminsToday

Despite a few uneasy moments for organizers, the shakeup did provide a festive and raucous crowd for the remainder of the evening. Classified shared beers and jazz cigarettes with his fans in the front rows.

In terms of early feedback received by TFEC, the results were mixed.

"There were a few people in the VIP who were upset about what happened, and we totally understand that. We had a lot of people message us and say that we handled it well."

He estimated there was 1,800 or so people in the park on Friday night.

Tickets are still available at the gate for $60. Will Call opens at 5pm, and gates open at 6pm. Tonight's lineup features Sudbury's Blackwood Sinners, followed up by an acoustic set by Adam Gontier, formerly of Three Days Grace. Two Canadian rock staples will follow with Finger Eleven and Big Wreck.

Complimentary shuttles will depart from the parking lot on Riverside Drive at approximately 12:30 a.m. One travels west, and one travels east towards the Downtown core, South Porcupine, and Porcupine.

The healthy secret about frozen food people in Timmins should know

Hey, Timmins, is ordering meal kits really worth it?