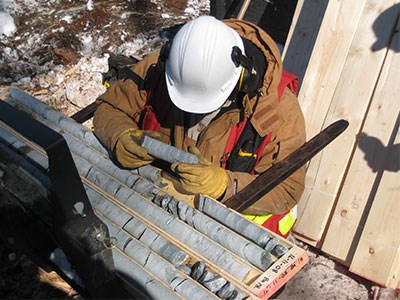 File
Northern Ontario’s mining supply and service sectors generate an estimated $5.6 billion annually and support an additional 23,000 high-quality jobs throughout the region, according to FedNor.
"The Government of Canada recognizes the strategic importance of these key sectors and is stepping up efforts to help businesses start up, scale up and create
high-quality jobs that support families and sustainable growth throughout the region," reads a March 5 news release.
Parliamentary Secretary Terry Sheehan, and Mayor Carman Kidd, City of Temiskaming Shores, have announced the roster of 67 businesses and organizations that will take part in the seventh annual Northern Ontario Mining Showcase (NOMS) at the 2021 Prospectors and Developers Association of Canada (PDAC) International Convention.
PDAC 2021 will take place virtually from March 8 to 11.
"Led by Temiskaming Shores, NOMS will help connect delegates from around the globe with mining and supply service companies from across northern Ontario," reads the release. "The virtual platform will provide access to a broader audience of business leaders, investors and industry colleagues worldwide. As the largest pavilion at PDAC, NOMS will also help northern mining supply and service companies scale up, enhance their digital presence, create jobs and increase trade, both domestically and internationally."
As a returning exhibitor, Drillco is one of many businesses that have capitalized on the unique marketing and promotional potential offered by the PDAC conference.
In fact, this North Bay-based manufacturer of specialized mining equipment credits its participation in NOMS for increased sales and global awareness of its cutting-edge, clean-tech drilling system.
“We are thrilled to be back at PDAC as part of the Northern Ontario Mining Showcase," said Dave Jones, business development officer, Drillco. "Our sales team is in the process of rolling out our clean-tech drilling system and the FedNor-funded pavilion is helping us connect with potential buyers around the world, which is helping us increase sales and exports for this cutting-edge technology.”
Featuring attendees from more than 130 countries, the Prospectors and Developers Association of Canada (PDAC) International Convention is one of the world’s leading mineral and exploration conferences and trade shows.
The full list of NOMS participants is available here.

Timmins area poised to benefit from global demand for critical minerals
Apr 17, 2021 7:18 AM