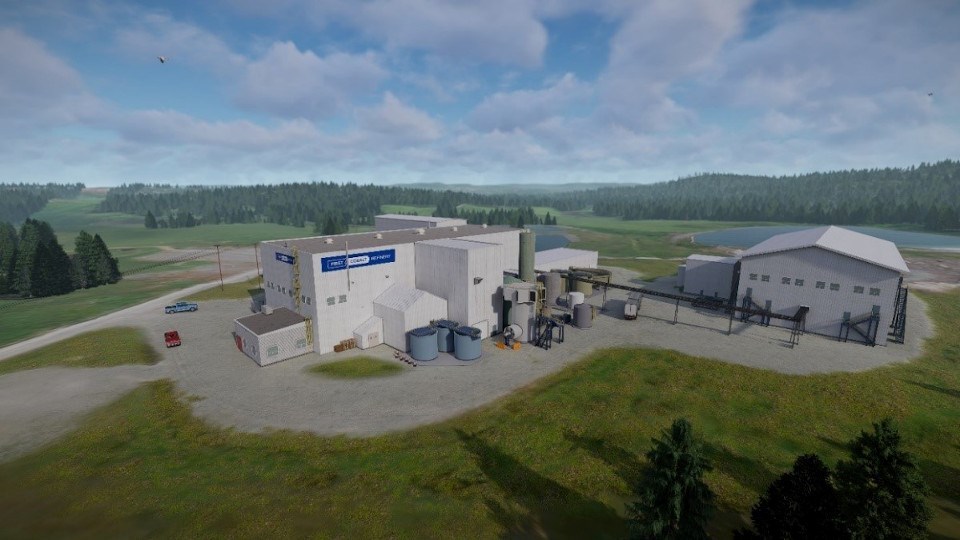 First Cobalt's site rendering of its refinery, just east of the town of Cobalt. (Supplied)

The owners of a renovated cobalt refinery in northeastern Ontario have signed a supply agreement with Glencore to receive unprocessed cobalt from the Democratic Republic of Congo (DRC) by late 2022.

Toronto's First Cobalt announced it has signed a five-year supply contract with Glencore AG to ship material from Kamoto Copper Company, its subsidiary in the DRC, starting in the fourth quarter of 2022. Glencore has helped finance First Cobalt's plant-reopening plans.

A second supply agreement is in the works after First Cobalt inked a memorandum of understanding with IXM S.A., a subsidiary of China Molybdenum Co. (CMOC), to source cobalt from the Tenke Fungurume Mine in the DRC. The parties are working toward reaching a definitive contract.

In a Jan. 12 news release, First Cobalt president-CEO Trent Mell called it a "pivotal moment" in their strategy to be North America's only refiner of processed cobalt to supply the electric vehicle market.

The refinery, located five kilometres east of the Town of Cobalt, is being upgraded and physically expanded with new buildings.

The plan is to beef up its production capacity in converting cobalt hydroxide coming from the DRC into a highly pure, battery-grade cobalt sulfate material used by manufacturers of electric vehicle batteries.

The company said the cobalt hydroxide will be purchased from the mining companies at current market prices.

The once-dormant former Yukon refinery is being brought back into operation with a $77-million construction program in order to quadruple production capacity.

First Cobalt wants to position the facility as an international processing operation, accepting cobalt feed from around the world.

Built in 1996, the refinery was placed in mothballs by the previous owners in 2015. First Cobalt acquired the facility in 2017.

Originally configured to process 12 tonnes of cobalt sulphate a day, expansion would boost it to 55 tonnes, representing five per cent of the world's cobalt refining capacity.

Construction to expand the plant is expected to start sometime during the middle of this year.

Ottawa and Queen's Park elected to pitch in with the company's revitalization efforts just before Christmas, injecting a combined $10 million through FedNor and the Northern Ontario Heritage Fund.

The combined incoming cobalt feed from these two African mines would amount to 4,500 tonnes annually – roughly 90 per cent of the refinery's production capacity – which is enough to produce 22,250 tonnes per year of cobalt sulfate.

The company said it intends to purchase an additional 500 tonnes annually at a later date through contract or spot market purchases.

In the release, First Cobalt cautioned that these supply agreements are conditional on obtaining the necessary working capital, offtake discussions, and operating permits from government regulators, but added that everything seems to be on schedule to support the start of construction this year.

Providing a "clean and ethical supply of cobalt" in its supply chain for the electric vehicle market remains a point of emphasis by the company in the news release.

The Democratic Republic of Congo is the largest producer of cobalt, with more than 50 per cent of the world's cobalt reserves. But it's also notorious for its artisanal and small-scale producers, employing child labour in unsafe working conditions.

First Cobalt said they're committed to buying high-quality cobalt from mines powered by clean hydroelectricity and to source cobalt from responsible mining operations.

The company said they are – along with Glencore and CMOC – members of the Cobalt Institute, which has developed the Cobalt Industry Responsible Assessment Framework, a risk management tool involving public reporting on environmental and social issues specific to the cobalt supply chain to establish an ethical, premium brand of cobalt sulfate for the electric vehicle market.

First Cobalt pledges to maintain a low carbon footprint with a refining process of producing one kilogram of cobalt sulfate that will be 50 per cent lower than the international industry benchmark.

"Our globally competitive cost structure and industry-leading ESG (environmental, social and governance) credentials put us in a strong position for a rapidly growing EV (electric vehicle) market," added Mell in a statement.

"With feedstock arrangements in place, we can continue to advance our vision to create a new cobalt supply chain in North America. Electric vehicle sales in Europe were up more than 100 per cent in 2020 and the U.S. will be the next large market to take off. We are now focused on offtake arrangements and the financing package with the goal of commencing construction in mid-2021 and full commissioning in the second half of 2022."