‘Exciting’: IAMGOLD could begin extracting gold at Gogama mine as soon as next year

The company has secured a site near Hollinger Park in Timmins
Oct 27, 2020 9:00 AM By: Colleen Romaniuk, Local Journalism Initiative Reporter 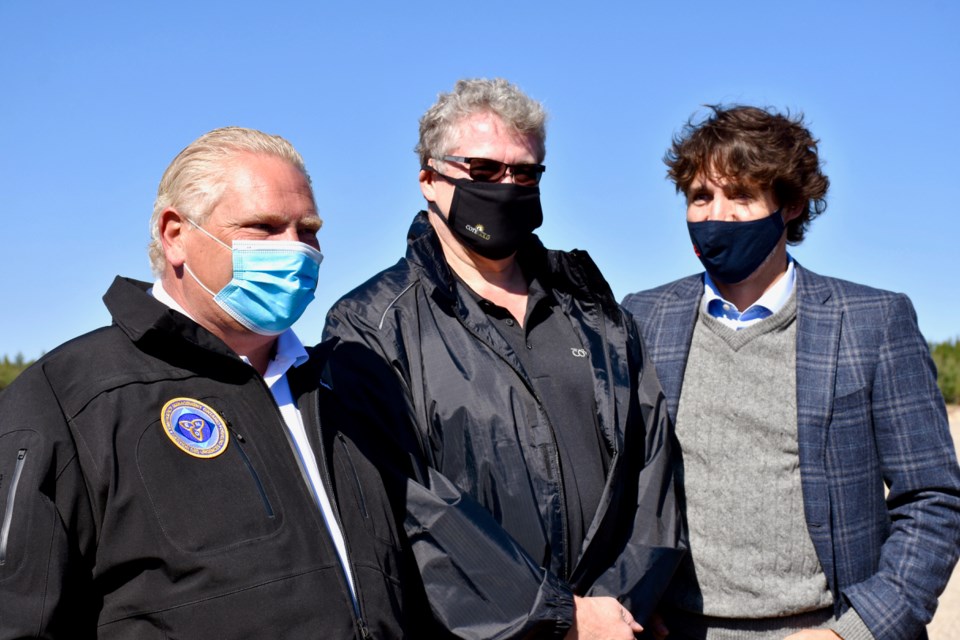 Last month, Gordon Stothart and his team at IAMGOLD celebrated the official opening of the new open-pit gold mine located about 20 km southwest of Gogama with a ground-breaking ceremony attended by Prime Minister Justin Trudeau and Ontario Premier Doug Ford.

The $1.7-billion project is expected to create more than 1,000 jobs during construction and 450 jobs during operation and generate $5 billion in wages through direct and indirect job creation and $10 billion in economic activity.

Stothart stressed the connections the company has made to communities in Northern Ontario.

“We will continue to work closely with Indigenous and Northern communities as we build and operate Cote,” Stothart told the chamber this week.

“We have strong relationships and deep roots in Sudbury, Timmins, and Gogama, and our local project office will be based in Sudbury.

“Timmins and Sudbury will be the main transit sites for Cote employees. Sites have recently been secured on Falconbridge Road near the Kingsway intersection in Sudbury and on Water Tower Road behind Hollinger Park in Timmins.”

The company also has a longstanding partnership with Laurentian University and the Bharti School of Engineering.

“Since our project announcement in July, the focus on site has been on preparing for constructions. Crews have been working hard on fishery location with more than 300,000 fish relocated so far,” said Stothart.

“We’ve been clearing land and preparing to construct roads. Work recently started on preparing the site for permanent and construction camp pads. The units for this camp are already on site and ready to be installed.”

There are about 90 people currently working on-site, and 544,000 hours of early work has been completed with zero loss-time injuries.

The bulk of construction will begin on the project in the spring of 2021, which includes camps commissioning, major earthworks, site site-wide water management and plant construction. Full production levels should be attained by 2024.

Although IAMGOLD is not publicly advertising business opportunities during construction, the company’s EPCM contractor Wood Canada is inviting pre-qualified contractors to bid for work.

“As you can imagine, since we made the announcement, Wood has been inundated with requests for pre-qualification,” said Stothart.

“We are aware that some contractors and suppliers have not heard back yet from Wood about their pre-qualification. Wood has assured us that they are working on the backlog of proposals they have received and have been actively reinforcing their procurement team over the past couple of months.”

IAMGOLD began construction of the project this year and could begin extracting gold as soon as 2021.

“It’s been exciting for IAMGOLD over the past while. In July, we announced, with our partner Sumitomo Metal Mining, that we will proceed with the construction of the Cote Gold project, a rare and valuable asset,” said Stothart.

“Cote provides significant transformational value to IAMGOLD. At $1,700 (per pound) gold, Cote generates a net present value of over $2 billion US and an internal rate of return of over 22 per cent with an 18-year projected mine life and over seven million ounces in reserves.”

The mine, which is expected to be in commercial production by the third quarter of 2023, is expected to produce around 470 ounces of gold on an annual basis throughout the first six years of operation.

Continued exploration activities indicate that the lifespan of the Cote Gold mine could be extended. The mine site sits within a land package of about 25 square km, but IAMGOLD is currently exploring about 540 square km in the area.

Last year, the company announced the Gosselin discovery about 1.2 km northeast of the Cote Gold deposit, which could add about eight to 10 years to the lifespan of the open-pit mine based on early projections.

Stothart told The Sudbury Star that he “firmly” believes that Cote Gold could be a 30-year operation in a past interview.

“One of the features of this mine that we are very excited about is autonomous deployment. The Cote mine will have autonomous haul trucks and drills. Autonomous technology makes for more predictable operations and is already widely deployed around the world,” said Stothart.

“To understand why we believe autonomous technology is about now versus the future, we would highlight the benefits including higher productivity, particularly in truck-shovel interactions, better costs, and a more rationalized camp size.”

Mines that are currently using autonomous technology, Stothart added, have been able to expand their implementations at a rapid pace. Some are even retrofitting conventional trucks with autonomous equipment.

IAMGOLD has a letter of intent with Toromont for machine purchases, and a memorandum of understanding with Caterpillar and Toromont for autonomous haulage system deployment.

The company also has an agreement with Epiroc for the purchase of autonomous drills and drilling equipment as well as the drilling system deployment.

Stothart has been actively working with Indigenous groups throughout the development of this project, and the company signed an impact benefit agreement last year with Flying Post First Nation and Mattagami First Nation.

The Cote Gold project is within the traditional territory of Flying Post and Mattagami First Nations, which make up the Wabun Tribal Council, and the IBA guarantees job opportunities and financial and economic benefits for the First Nations and their members.

IAMGOLD also has a memorandum of understanding with the Métis Nation of Ontario.

Federal funds will help teach kids about where their food comes from
Mar 4, 2021 8:00 AM
Comments