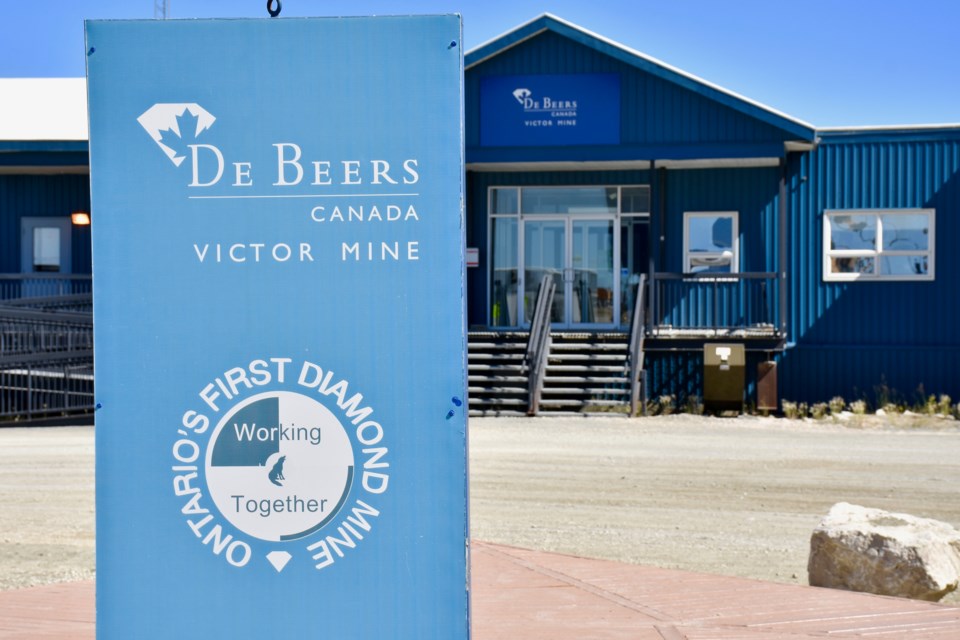 The leadership of the James Bay coastal community calls the company's provincial application to build a landfill "suspect" at the remote location 500 kilometres north of Timmins.

The First Nation said De Beers has applied for 97,000 cubic metres of landfill volume, just below a 100,000-cubic-metre threshold, which would trigger a comprehensive environmental assessment under Ontario law.

"This level gets the landfill under the legal radar, but does not mean it would be any less threatening," the First Nation said in an April 6 news release.

The community insists the company wants to put the landfill in a place that has been of "critical cultural, spiritual and subsistence importance to the Kattawapiskak Cree People for thousands of years."

The former open-pit mine site is 80 kilometres west of Attawapiskat. The company and the community have had a sometimes turbulent relationship over a decade's worth of production, which came to a close in 2019.

The First Nation is comparing the placement of this landfill with the Juukan Gorge fiasco in Western Australia, where Rio Tinto blasted a 46,000-year-old sacred site of the Puutu Kunti Kuurama and Pinikura peoples in order to access high-grade ore.

They're calling on De Beers and its owners, Anglo American and the Republic of Botswana, to haul the demolition waste out for reuse and recycling, not left behind in a wetland that threatens the "destruction of millennia-old cultural sites."

"We don't believe that Anglo American and the Republic of Botswana want to allow De Beers staff to create a giant mine landfill in our traditional territory."

"Attawapiskat leadership says that the manner in which De Beers is seeking Ontario approval for the new landfill is suspect," added fellow council member Sylvia Koostachin-Metatawabin.

De Beers counters that the proposed landfill would be located within the footprint of the former mine site, inside an existing approved mine rock pile. The company insists this area was not identified by Attawapiskat community members as being of any cultural and heritage significance "and would not result in any additional disturbance."

The company said it worked closely with Attawapiskat to identify and protect areas around the Victor Mine site that were deemed cultural and heritage resources.

This was done as part of a Traditional Ecological Knowledge study conducted in 2003, involving 65 community members, mostly elders, and was open to input from everyone in the community, the company said in a response to Northern Ontario Business.

"At no stage during these studies was the site of the proposed landfill identified as being of cultural or spiritual significance," said a statement attributed to the De Beers Group.

The protections were written into the impact benefit agreement between De Beers and the First Nation, the company said.

The closure and reclamation plan was done in consultation with Attawapiskat, De Beer ssaid, which included an approved demolition landfill at the rock pile site to deposit "inert" waste. All material deemed hazardous will be removed from the site for disposal at an approved facility.

De Beers said the rock pile site will be capped.

The company cautions the landfill is a contingency to deposit material should they not be able to remove all potentially recyclable material from the site. The early possible approval for their landfill application by the Ontario government is the summer of 2022.

Winter roads will also be built into the mine site in 2022 and 2023 with local Indigenous communities, allowing De Beers to "exhaust all opportunities" to remove recyclable material from the mine site, the company added.

"We would also like to add that we continue to reach out to community leadership so that we can work together to fully understand their concerns and stand ready to meet with them at any time," De Beer said.

Priestly Demolition recently released a video of its tear-down at the Victor site. Priestly Demolition is with the Salvage Kings TV show, which is featuring the teardown of Timmins buildings in its upcoming season airing later this month.

Timmins area poised to benefit from global demand for critical minerals
Apr 17, 2021 7:18 AM