The ‘infodemic’ is not helping people truly understand COVID and vaccines, panel says 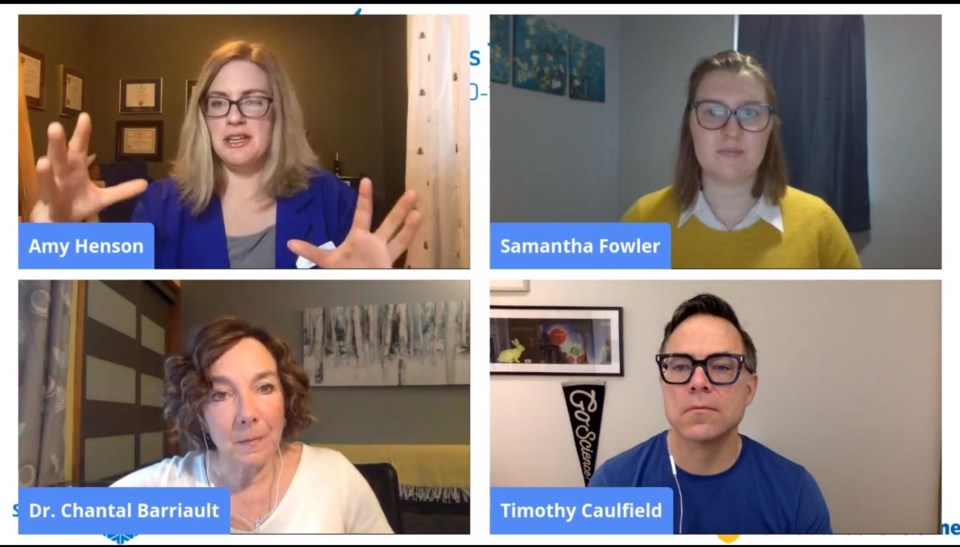 Misinformation has become so much a part of the wider discussion on COVID-19 and vaccines in Canada that communications experts have labelled it as the infodemic.

The infodemic was the topic of an online panel discussion hosted by Laurentian University and Science North in Sudbury on Wednesday.

The event was moderated by Science North staff scientist Amy Henson and featured a panel of several researchers in the field of science communication.

They included Samantha Fowler, a graduate of the Science Communication program at Laurentian University, Dr. Chantal Barriault, director of the Science Communication program at LU and Dr. Timothy Caufield, a Canada Research Chair in health, law and policy at the University of Alberta, as well as being a television host and author.

Henson started the webinar by asking Caulfield to talk about some of "the really absurd claims that are out there" about COVID 19.

"You are right," said Caulfield. "There is so much misinformation that is out there."

He highlighted the 5G conspiracy, which suggests the coronavirus is being transmitted by advanced mobile telecommunications, as well as the belief COVID-19 is a bio-weapon and the notion the virus can best be treated by cow urine.

"There was also the hydroxychloroquine debacle. That's a very good example of misinformation," said Caufield, partly because it emanates from a traditional medical source.

Caulfield also displayed visible dismay at the idea that 28 per cent of Americans were said to believe that wealthy philanthropist Bill Gates caused the pandemic himself as part of a conspiracy.

"This is the idea that Bill Gates started the pandemic to force vaccinations so he could put microchips in all of us," said Caulfield.

He added he was disappointed so many Canadians believe misinformation about vaccines. He said a recent study in Alberta indicated only 48 per cent of residents in that province were willing to get the vaccine right away.

In contrast, Caulfield also said that there has been an uptick among Canadians who believe the vaccines will be helpful.

"I think that's because of efficacy, and people understanding how important the vaccine is, but also what we’re talking about today, good science communication is having an impact," he said.

Caulfield also mentioned that up to 46 per cent of Canadians believe in one conspiracy theory or another relating to the causes and cures around COVID-19. He said one figure that stands out is that up to 30 per cent of younger demographics buy into the theories. He said he was speaking of 18- to 30-year-olds.

Caulfield said it doesn't mean that younger Canadians "are dumber or have less critical thinking," but more likely because they are more exposed to the misinformation that is so prevalent on social media.

He said disinformation is when somebody is trying to spread untrue information that has intent behind it. It can be a political message or ideological information that is part of an agenda or even has something to be sold.

He said misinformation, however, describes information that could be from "your crazy uncle" who texts you something or speculates on information.

Caulfield said he now tends to lump all of this under the heading of “infodemic,” not only because it describes so much wrong information but also because the information is having an impact.

Panelist Fowler spoke about her research on misinformation as it applies to social media. She said her research involved Facebook and the issue of vaccination hesitancy.

She said she was also surprised to discover that in a place where she expected people to be focused on vaccines, that wasn't the discussion at all. She said the vaccine topic was used to jump off into other discussions about misinformation surrounding other matters.

"In fact, 80 per cent of the time they were talking about other topics," said Fowler. This included government response, lockdowns, COVID tracking and masks.

She said many of the Facebook discussions created an environment where misinformation just spreads wildly because they became "safe spaces" where somebody could write anything they wanted and find empathy and support from others who might agree with them.

She said people would post encouraging notes congratulating each other for having their bizarre ideas.

"I am so happy to have this space where I can share these ideas because when I go out into the real world people call me crazy for saying Bill Gates is causing the lockdown," is how people would react, said Fowler.

Fowler said the attacks even extended to people who pointed out obvious spelling mistakes.

She also noticed that in her three-month period of researching social media, many people get stuck in a time lock where they refuse to accept new information.

"It didn't really matter what new information was coming out, these people like to pull articles that supported their beliefs from four months ago, or a year ago." Fowler said it was important to note because scientific information about COVID-19 has been changing rapidly and frequently in the past year as new information about the disease has been discovered.

She said any change in scientific information was criticized as the scientists knowing nothing.

"If you have to change your mind, you never knew anything to start with," was the prevailing attitude said Fowler.

Panelist Barriault commented on why people latch on to so many unusual ideas and conspiracy theories.

"It's understanding how we think and how our brains process new information. It's actually part of our toolkit to protect ourselves against misinformation," said Barriault. "Understand that our brains actually like to take mental shortcuts. We are all like this.

"You spend less mental energy not having to dive deep into something and really go and find the right answer or the valid or credible source."

Barriault said it is much easier to just read the headline of a news article instead of absorbing the full story.

"It is much easier to latch onto something that actually conforms or fits in with what you already kind of believe or think you believe," she said.

Barriault also said that if when a person comes across misinformation on a regular basis, then the brain works in a way that says if this information is easy, then it becomes familiar.

"Then if it becomes familiar, it feels true," said Barriault. She said the concept is backed up by research that when an idea comes back to you often, then the brain accepts it as truth.

Barriault said we have to become more aware of how our brains take shortcuts.

She said it is important to read past the headline, because even though the headline is true, it might not convey the right message. Barriault's example with Canadian media is that it will feature a headline about people hesitant to take the COVID-19 vaccine, when the truth is that the majority of Canadians actually approve of the vaccine.

The problem is that if Canadians keep seeing the negative headline, after awhile, people will believe the negative side of the story.