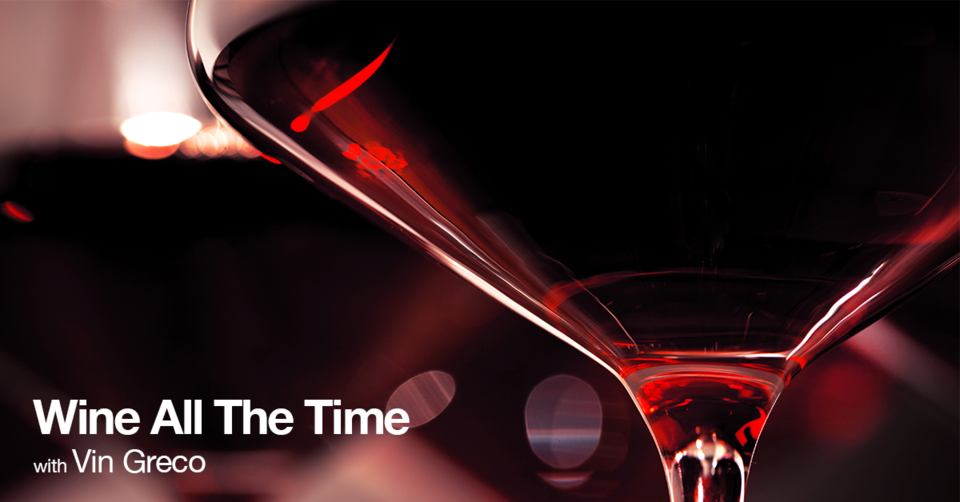 In our community, there are many who associate me with wine, assuming that I am involved in making my own.  I’m not.

There are a couple of people in this northerly part of Ontario around Sault Ste. Marie who actually grow their own wine grapes and make wines from them, and there are a whole lot more who either buy grapes or juice or kits and enjoy the fruit of their labour.

With my interests in the wider world of wine, with so many wines to experience, making my own just doesn’t make sense – never-mind the quality, or lack thereof, of my efforts.

That said, I really enjoyed a conversation I had recently with Reno Monaco as he reminisced about making wine with his father, Primo, even going back to times around the second world war.

Today, we have access to thousands of wines through the LCBO, but go back 50 years and more, and the situation was quite different.  There was little to choose from, even if you could afford it, and for many whose families had come to the new world from places like Italy with wine an every-day part of their lives, home wine-making was an equally important part of their lives here in North America.

Then, there was no such thing as u-brews and wine kits, or even buckets of juice. Instead, one would wait for the California harvest, and then buy the grapes that came in by the box-car load.

The mainstay grapes, as Reno remembers, were Zinfandel and Muscatel, while Alicante might be included less frequently.  He recalls that his dad would check the sugar levels of the grapes he was buying carefully, as it is the sugar, of course, that is converted to alcohol.

As a boy, Reno would help Primo with the winemaking, recalling that his father actually used a house jack in pressing the grapes – and squeezed every drop out of them.  This was done upstairs, and then the juice was taken down to barrels in the cellar to ferment and age.

Remo would be assigned to carry the juice down in wooden pails, he said, and his father cautioned him to be careful.  If any spilled Primo would tell him, “Don’t you know how hard we worked to get this juice?  You don’t want to spill any.”

Eventually his father drilled a hole in the kitchen floor behind the door so that he could pass a hose down through the hole and into the barrel – no more spillage!  When Reno asked, “What’s Mama going to say about the hole!” his Dad laughed and said, “Don’t worry, I’ll put a plug in it!”

Nowadays, some wineries boast about their gravity-flow operations, but Mr. Monaco was a life-time ahead of them.

During the war, when grapes were hard to come by, Reno remembers Primo putting raisins in a muslin sack and adding them to the mix.  They may not have been regular wine grapes, but they did the trick. In the process, he was inadvertently becoming a pioneer for Amarone, now the premier wine of the Veneto, which is made by using partially dried grapes.  People may think that Amarone has been around for centuries, but as a dry wine, it really only began to be sold in the 1950’s.

Remo also tells of the time as a youngster that his father wanted the wine transferred from one barrel to another, a process we call racking.  He gave 13-year-old Reno a hose that he put into the wine barrel, and started sucking on it to create the suction that would allow the transfer.

Reno engaged diligently in the task, but each time Primo asked, “Is it coming yet?”  Reno would just shake his head and keep on sucking. Eventually, he put the hose into the new barrel… and passed out!

As he lay on the floor, his father called his mother, and when she saw him cried, “Is he hurt??”  Primo just chuckled and said, “No, he’s drunk!”

I have enjoyed many, many wines, and hope to enjoy many more, but I know that none of them will ever give me the kind of memories that Reno has of making wine with his father.

Robert Mondavi Chardonnay Reserve 2014, Carneros, Napa Valley, $44.95.  Carneros, in the foothills overlooking San Pablo Bay, the furthest inland area feeding into San Francisco Bay, is the coolest growing region for Napa Valley, and perfect for Chardonnay. This wine is sleek and lush at once, with fruit and oak and acidity melding perfectly into a smooth and immensely pleasing whole. It is the kind of wine you want to just sip, think about, and enjoy.  It merits that kind of attention.

If one needed convincing that Niagara could produce world-class red wines, Inniskillin has dismissed that concern handily with two stellar reds, the Montague Vineyard 2015 Merlot, $29.95, and the Discovery Series Merlot Petit Verdot 2015, $39.95.

The Montague Merlot is solid, substantial and plush.  The dark cherry and plummy fruit is currently wrapped in a slightly savoury velvet cloak, and everything is in harmony.  This wine is pleasurable now, and will get better and better with age.

The Discovery Series wine is a blend of 70% Merlot and 30% Petit Verdot, and in comparison with the Montague, comes across as a bit brighter in acidity at the moment.  The nose carries a whiff of tobacco and cedar, while the palate displays very good red berry fruit, along with the gentle impression of vanilla sweetness towards the finish.  The depth is significant, and the wine will continue to evolve as it ages.  It is, in every respect, top-notch.

Both wines are available only at the winery.  For questions regarding ordering, contact Candis.Scammel@cbrands.com.

Available at the winery, the LCBO, and the Wine Rack stores is the Inniskillin Reserve Riesling 2014, $18.95. This is definitely dry, but ample fruit (apple, pear, peach) carries the day. It is quite refreshing with a good crisp finish that prompts you to take just one more sip.  It is a contender with chicken, ham, or trout, and it will be a satisfying white on the patio or porch all through the summer.

The companion Inniskillin Reserve Chardonnay 2014, normally $18.95, is $3 off at $15.95 until July 16 at the Wine Rack stores. This is rich in flavour, and can rival many examples from warmer climates –there is melon and apple and spice here, and a clear oak element that reigns itself in just in time to keep from overwhelming the fruit.  It is unlikely you will find a richer-tasting Chardonnay at this price.

(If you want the Chardonnay toned down, at the Wine Rack the Jackson-Triggs Cellar Select Chardonnay is $2 off at $11.95.  What it lacks in complexity it makes up for in purity, with its straight-forward apple-like fruit, and appealing clean finish.

Spanish wines are highlighted, but there are also a dozen California reds available, along with a raft of Chardonnays from around the world. As well, there are some good values peeping through from other areas and varietals.

Alamos Torrontés 2016, $15.95 – Torrontés is the aromatic wine of South America. Winealign’s Sara d’Amato calls it “expressive but not over the top” as well as being “bright and energetic…featuring notes of apple blossom, and white grape, tender rose and grapefruit.” – 88.

Mulderbosch Chenin Blanc 2016, $14.95 is from a very reliable South African producer, and its “steen op hout” Chenin Blanc gets consistently excellent ratings for this dry-farmed bushvine white.  Vintages calls it ripe with “impressive tropical fruit and a fine mineral tone.”

Hersandiere Muscadet Sèvre et Maine 2014, $15.95 with its massive 96 from the Decanter World Wine Awards is a steal.  With its minerality and saline character this white from France’s Loire is the quintessential perfect pairing for shellfish.  Decanter also references its “harmonious notes of white apple and white peach with a lovely sappy acidity. “

Velenosi Villa Angela Pecorino 2015, $15.95 from the Marche region on Italy’s Adriatic Coast is another of those Italian whites that are beginning to makes themselves better known, thank goodness. It has stone fruit and citrus flavours, along with gentle herbal notes..

Baron de Ley Rioja 2016. $13.95, is a Spanish blend of 90% Viura and 10% Malvasia.  It is straight-forward, with the suggestion of citrus, apricot, and even banana, along with a soft mouth-feel.  Vintages suggests pairing it with grilled shrimp.

Farina Valpolicella 2015, $14.95, is the simple, original version of the wine that recently has morphed from being a simple good table wine into the phenomenon, “Ripasso” which is enhanced by refermentation the skins of partially dried grapes.  Here, we have the straightforward Valpolicella, worth visiting for its own sake.  Pair it with pasta or pizza, and enjoy tart cherry and plum fruit with a soft dry finish.

Pago De Valdoneje Mencia 2015, $14.95, from the Bierzo region of Spain has the robertparker.comapproval with a score of 91, which describes it as “juicy, ripe, very attractive and heady, quite open and showy.”

Bastide Miraflors Vielles Vignes Syrah/Grenache 2015, $18.95, also has the parker people impressed, who describe it as “ a ripe, sexy, heady beauty” which is “deep, unctuous, open knit and layered” – a sensational value.  94

Gnarly Head 1924 Double Black Red Blend 2015, $19.95 is suggestive of the field blends that were created by the old Italian farmers in northern California.  It is dark with sweet fruit suggestive of fig and spice, and described by WE as being “full-bodied and bold” – 90.

Join us for a wonderful experience at Stokely Creek Lodge just north of Sault Ste. Marie as Charles Baker of Niagara’s Stratus Vineyards leads us through a tasting of 5 wines followed by dinner with 4 additional wines, followed by Brunch the next morning with three additional wines, all for just $225 per person.

Some have inquired if it would be possible to just come for the July 21st evening portion.  If you are unable to stay over, the dinner and tasting alone will be $120 per person.  If one could only make the Brunch the next day, the cost is $60 per person. Both options are available. (It means that the overnight accommodation is only $45 per person – a very reasonable price in itself.)  Whatever you can manage, you will be in for a real treat.

Trending in Wine all the time