The Other Side: A microcosmic examination of the Gogama spill response

Those individuals and families who chose to settle and stay in this remote region wish to maintain the tranquil existence they are accustomed to, writes TimminsToday columnist Ed Belliard
Dec 1, 2016 12:00 PM By: Ed Belliard 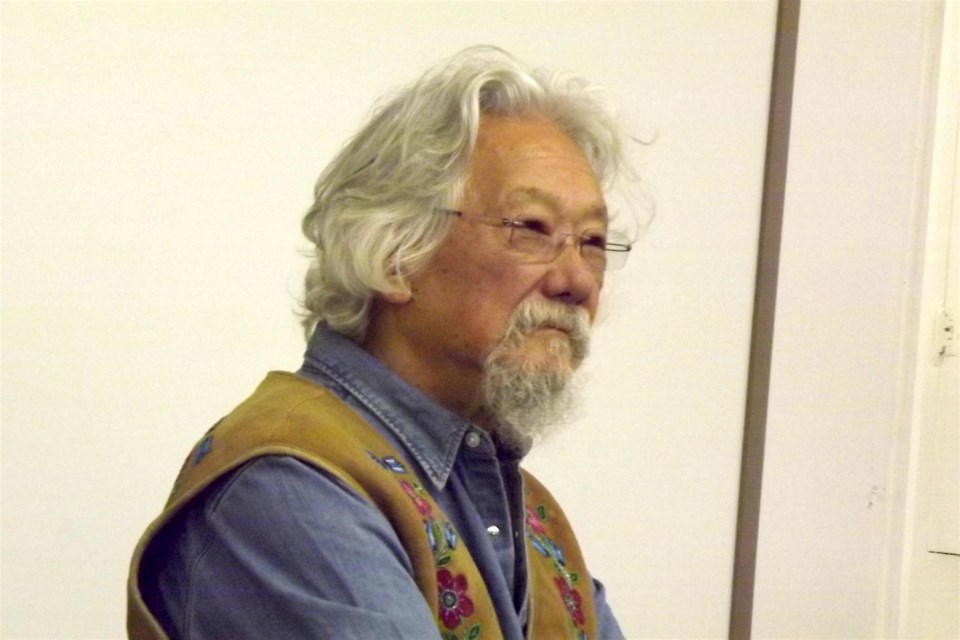 David Suzuki is pictured in Gogama, on Nov. 18, 2016. Ed Belliard for TimminsToday

At a delegation where missionaries and Six Nations people came together in 1805, the celebrated orator Red Jacket declared “To you the Great Spirit has given the book, to us He has given the earth.”

On Friday, November 18, 2016, Father Sun chose to cloak the Northern Ontario skies in hues of grey.

That was fitting, for those colours inspire contemplation and reflection.

Noted environmentalist, Dr. David Suzuki, had agreed to visit the site of the CN Rail derailment which occurred on March 7, 2015. On that day, a 94-car train spilled almost 1 million litres of crude oil into the Makami River.

Subsequently, a massive explosion, fire and a damaged bridge resulted. This one wasn’t the only incident. Back in February of the same year, another CN Rail derailment occurred 30 kilometers from the small village of Gogama.

As though the Universe, or Kitchi-Manitou himself, had conspired to direct Mr. Suzuki to Northern Ontario, he was approached by Gogama Fire Chief Mike Benson and Mattagami First Nation Chief Walter Naveau in Toronto on October 18.

Messrs. Benson and Naveau were dissatisfied with the cleanup efforts thus far; they felt they were woefully inadequate. Now faced with the prospect of ice covering the waterways for another winter season, along with the unmistakable long term environmental impact of the spill, they were rallying at Queen’s Park.

Mr. Suzuki was also in Toronto that day rallying the Government of Ontario, which is currently reviewing Ontario’s Environmental Bill of Rights (EBR). Through his foundation, with the added support of the Blue Dot Movement, Dr. Suzuki was crusading for the inclusion of clauses relating to clean air, clean water, clean food, and healthy ecosystems. Surprisingly, he was not even aware of the spill. Northern hospitality was extended and accepted.

From a scientific and ecological perspective, there is a lot at stake here. The concerns of nearby citizens were indeed justified. When large quantities of oil are transported over vast territories, weather challenges factored in, there are bound to be accidents.

In his defense, CN Director of Public and Government Affairs, Jim Feeny, stated that they are following remediation standards set by ministry and environmental bodies. At this time, three out of 29 sites were recently deemed to “merit special attention.”

A specialized vacuuming system is in place, removing contaminated sediments, filtering the water with an eventual return to the river in mind. Their approach may seem unconventional, but they vow to stay the course and promote dialogue over confrontations.

The 80-year-old Dr. Suzuki’s next destination was at the Gogama Community Center. He addressed a full house of residents, a Member of Parliament (France Gelinas), First Nations, and media members.

It was a fast paced hour-long Town Hall meeting. Once more, personal as well as regional and environmental issues were brought up.

If the waterways and lives of the local residents are to remain sustainable now and into the next generations, actions and determination must not wane. They must not surrender their power to capitalistic forces.

Those individuals and families who chose to settle and stay in this remote region wish to maintain the tranquil existence they are accustomed to. Inaction is not an option here. They’ve stepped up to the plate and will continue to do so, as needed.

Dr. Suzuki recognized this and clearly agreed that the Aboriginal Way knows the path towards connecting with Mother Earth and leading individuals towards unity and peace.

In the face of disasters, an adversarial approach or way of thinking may abruptly spawn forth, but in the long run a persevering esprit de corps may get more done.

The legacy and actions of these residents will reverberate throughout the water systems, the arteries of Mother Earth; it will be reflected upon the land and into the air.

On a microcosmic level, in that very room, they held the power to influence the world over.

After all, the greater world is only a mirrored reflection of smaller fragments, spaces along its vast surface.