Behind the mystery of 'The Popchuck Chronicles' 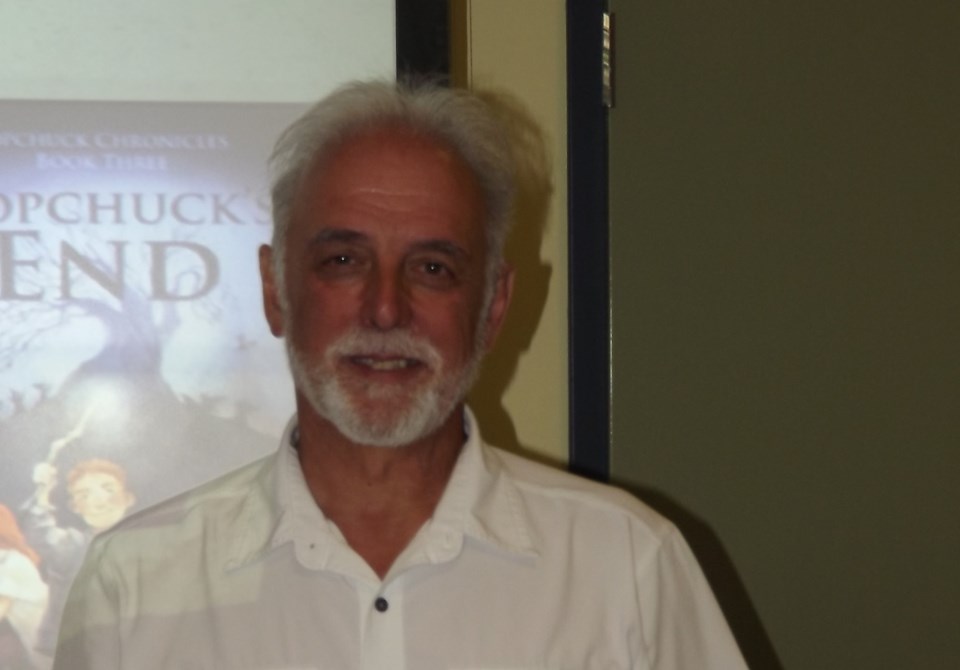 Ghost stories and supernatural events are not only popular with youngsters and the young at heart in these parts, they are widespread. Keep guarding your fears and illusions if you believe otherwise! These days, brave souls feel less of a need to safeguard their personal tales and ghostly encounters. Make no mistake; local legends and literature in this genre are swelling exponentially.

In a recent information session held at the Timmins Public Library, author, former high school English teacher, and education director, Paul Toffanello proudly addressed a lean crowd. Having occupied the position of director at Camp Bickell back in the 1980s, and growing up as a fan of children’s literature of all sorts, storytelling came natural to him. In fact, poetry and writing down ideas first sprouted when he was but a child. Luckily, he held on to his writing material and did not dispose of it, like so many children and their parents do.

His PowerPoint presentation mainly focused on his personal journey as a local youth with wide interests in reading borrowed books from the former public library location, gathering and collecting comic books which were then priced at 12 cents each, and attending three local theatres with entry fees of 20 cents. Babysitting came cheap at the time, he explained, as can be likewise said of books and movies. Perhaps unsurprisingly, two former Grade 7 pupils who were unwilling readers, inspired him to compose the initial Popchuck story. Although they were both enthused to recount the Camp Bickell resident ghost tale when they met up there in the wilds of northern Ontario, they would never dream of penning it. Reading was uncool for boys, after all. He did, and was thrilled to include characters, circumstances, and story lines that paralleled or simulated his life or the lives of friends and family members on certain levels. Are writers not inspired by every kind of people, both fictional and very much real? Indeed, they are.

The Popchuck Chronicles series, so far, involves three books. At the fictional Camp McAbre is where Neil Wybred and his two close friends find intrigue, fun, and mysteries. The greatest curiosities and most fearful ones no less, revolve around a seldom used outhouse with a secret passage… and a prankster ghost nearby. The second book, released three years later, in 2016, leads the three friends beyond the campsite and into the possibility that teachers and a new principal are disguised witches and wizards. The third instalment, Popchuck’s End, will be released this fall, it was revealed. Promisingly, the movie rights to the books were purchased last year by Lisha Yakub Sevanian of Calgrove Media in California. When the first two books were released, each had a frightening image of Paul’s associates on the covers. This was subsequently changed to better suit the younger reader fan-base and sales improved. The first book has reached its fifth printing and the second is in its second printing.

With the enthusiasm of Paul Toffanello and an equally stoked team of collaborators, success and added momentum is “down the pike.” Even though the trilogy might soon end, a spinoff is likely and collected short stories are in the works as well. For additional updates, check out www.popchuck.ca and keep a lookout for Paul Toffanello who frequents libraries and schoolrooms alike, engaging youngsters to read and write – especially topics they find fascinating, or familiar ones.

The Other Side: His potential remains rich and vibrant
Apr 19, 2017 10:00 AM
Comments
We welcome your feedback and encourage you to share your thoughts. We ask that you be respectful of others and their points of view, refrain from personal attacks and stay on topic. To learn about our commenting policies and how we moderate, please read our Community Guidelines.