The history of the Connaught Hotel

In this edition of Remember This, the Timmins Museum: National Exhibition Center looks back the Connaught Hotel with its lavish fixings and memorable grand opening
Aug 11, 2019 11:00 AM By: Remember This? 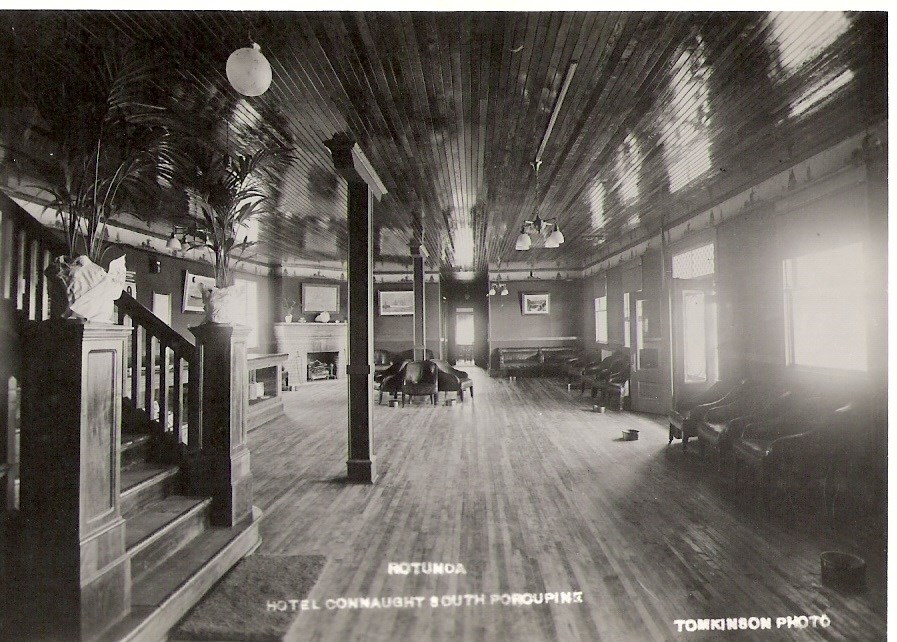 Interior view of the rotunda of the Hotel Connaught with several leather chairs lining the walls, and a staircase leading up. The floors and ceiling were hardwood and electric lights hanging from above. Timmins Museum

Despite having to restart after the July 1911 fire, Timmins became an established mining community very quickly. Train services, roads, waterworks, theatres, hotels, shops of all kinds, an emergency hospital, and a newspaper had all opened for business soon after the city was incorporated in 1912.

Despite the city’s rural location in the north, it hosted some reputable establishments. One of the more lavish places to stay in the area was the Connaught Hotel near the railway station in South Porcupine. It had a reputation that measured up to the high-end hotels of Toronto. Room rates in 1915 were $2.50 to $3 as advertised in the Porcupine Advance.

There were 75 rooms and 6 bathrooms with modern toilets throughout.  The hotel had writing rooms and parlors equipped with desks and heavy oak chairs. The flooring was all hardwood and every room had an electric bell and house telephone installed.  Fresh cut flowers were brought in regularly to decorate. On the upper level was a large covered balcony that overlooked the lake.

Their grand opening hosted an extravagant menu of green turtle soup, lobster salad, Wawaitin trout, prime rib, roast turkey accompanied by numerous cakes and drinks. From the beginning, the Connaught Hotel had elaborate electric lighting and a steam-heated dining room that seated 100 guests for its opening evening.  It must have been a desired place to stay for visitors once they arrived in the early days.