The circus comes to early Timmins

The Timmins Museum and National Exhibition Center looks back on the golden age of the circus and the lasting impressions it left on locals
0
Aug 4, 2019 11:00 AM By: Remember This? 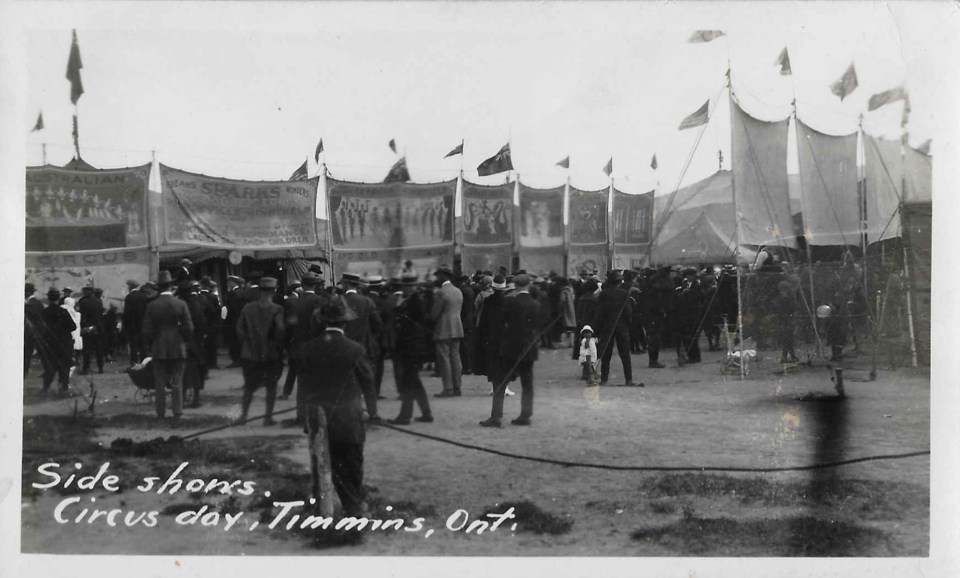 A view of the Sparks Circus sideshow here in Timmins early 20th Century. The circus with its horde of performers and beasts rolled into town transforming the landscape with its carnivalesque atmosphere for a brief time in the summer. Timmins Museum photo

In terms of live entertainment it really didn’t get much better than the circus in the early 20th Century.

Locals eagerly awaited the spectacle and saved their pocket money to really splash out on circus day. While many travelling novelty and vaudeville acts billed as “circuses” where being performed in the early years of the Porcupine camp, they could not compare to the grand and complex shows of later years.

One such show which made its way to town was the famed Sparks Circus based out of the U.S. This show made the first of many visits to the community on Aug. 2, 1919. The unloading of the 15-car show at the terminal station of the Temiskaming and Northern Ontario railway downtown drew frenzied wide eyed crowds, eager to get a first glimpse of exotic animals such as camels and polar bears disembarking.

The street parade which followed really put the scale of the production on full display, the first and perhaps the most impressive in our history. The procession included four elephants, the largest of them known as "big Mary” was reportedly even bigger than the legendary Jumbo and at the time not yet full grown.

The show itself contained all the elements we'd associate with the golden age of the circus such as trained lions and Bengal tigers bending to the will of their handlers, sideshows, clowns and dashing handpicked "equestriennes" displaying expert horsemanship. The dizzying and thrilling spectacle of the show no doubt lived on in the most vivid memories of young and old alike.