S.S. Kresge Co: The 'five and dime' arrives in Timmins

Communities big and small from Red Deer to Hamilton, Kirkland Lake to Saskatoon and of course Timmins all had their own local outlet of Kresge variety stores. These stores became ubiquitous and iconic mainstays in the North American retail landscape. Timmins Museum: National Exhibition Center takes a look back at Kresge Co. in the downtown and what it had to offer northern consumers
Nov 17, 2019 11:00 AM By: Remember This? 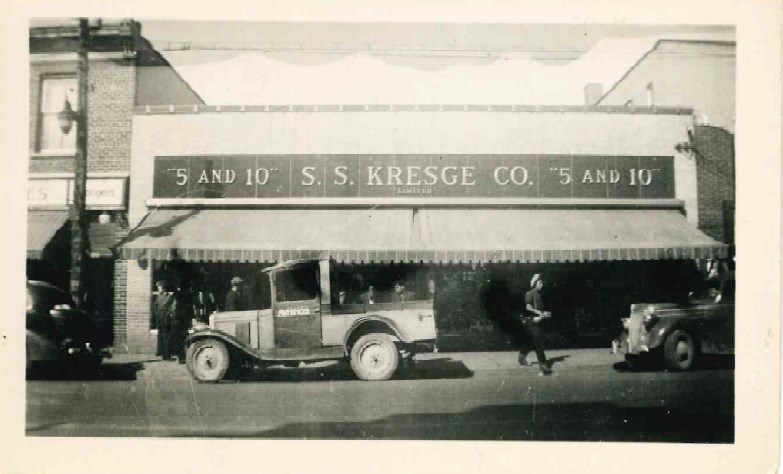 Pictured in the foreground, local baker Mrs. Margaret Harrison leaves Kresge on Third Ave, having just delivered an order.  Baked goods such as apple fritters, oatmeal muffins, and pies (butterscotch was Mrs. Harrison’s specialty) all locally produced made Kresge a destination downtown. The chain’s popularity endured well into and beyond  the post-war period until its eventual demise in the early 1990s as big box stores sapped business away from the downtown core. Timmins Museum

By the time Sebastian Spering Kresge incorporated the S.S Kresge Company in 1912, the Detroit-based businessman had 85 variety stores across the U.S. His highly successful chain crossed over into the Canadian market on the eve of the Great Depression in 1929.

The "five and dime", a forerunner of the modern department store, slotted itself nicely into a depressed economy, offering an unprecedented variety of low cost goods all under one roof. They carried everything from decor, toys, apparel, toiletries, foodstuffs, and homeware all ranging from 5 to 25 cents.

Our very own S.S. Kresge CO. was located at 22-24 Third Avenue and opened its doors in September of 1937 when competition for people’s dollar downtown was robust. It had two entrances on Third and Pine and patrons of the downtown taking a short cut through the store as they often did, found themselves leaving with an unplanned purchase or tasty snack.

The Timmins outlet performed very well and locals flocked there to peruse the stock, taking in the odd but evocative mix of scents of fresh baking and shiny new merchandise such as toys that no doubt many can still remember. The bright chrome-polished lunch counter was the calling card of Kresge, combining the pleasures of dining and retail all in one. On opening day in 1937 one could get a turkey dinner with whipped potatoes, giblet gravy, and red currant jelly for 25 cents.

A rousing and honest marketing campaign let locals know in no uncertain terms that its stores had a sense of purpose in the community, "...The new Kresge is your store, it employs local people and represents a substantial investment in your community."

This was not a cynical or self-serving piece of advertising. In fact, the chain boasted that 85 per cent of its merchandise was manufactured domestically, which is unthinkable today in this stage of advanced capitalism.