Rising from the ashes: The aftermath of the Porcupine fire of 1911

In this edition of Remember This, the Timmins Museum: National Exhibition Center looks back on the Porcupine fire of 1911 in a three part series this month
Jul 19, 2020 11:00 AM By: Remember This? 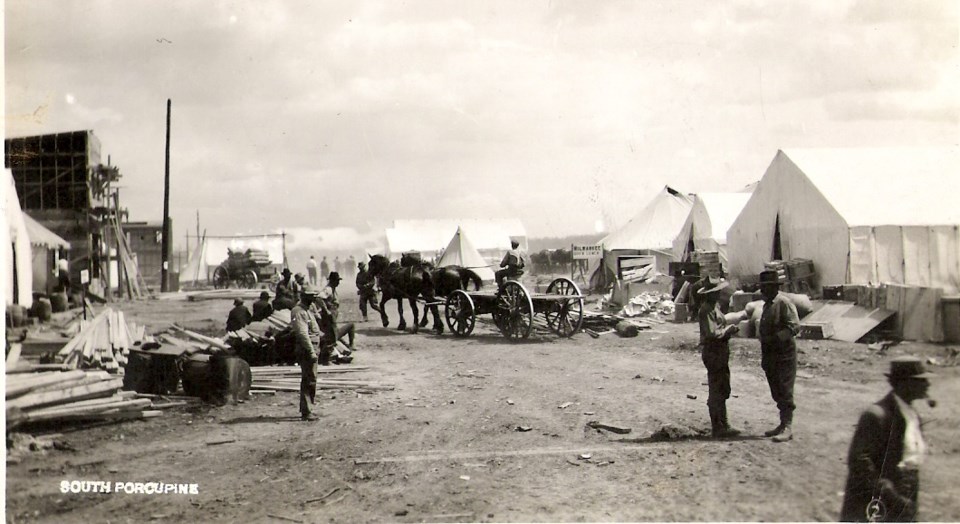 After the fire: Tents, construction, men, horses and wagons, with a sign on a tent reading 'Milwaukee Quick Lunch, 1911'. Timmins Museum photo

Many returned to South Porcupine after the fire to find a shortage of food, clothing, and medical equipment. The first visitors back to the Porcupine were salvagers, trying to collect things that they could still use.

T. Eaton Co. sent relief trains north filled with tents, blankets, clothing and supplies. The Northern Fire Relief Committee raised $37,000 in the Toronto area alone. One firm sent 1,000 loaves of bread. Churches across the south sent clothing. Survivors were given free time on the telegraph to contact relatives. The salvagers helped clean up and tents began to fill the streets again in South Porcupine.

Two days after the fire, it rained.

There was much unclaimed mail at the Aura Lake (now Schumacher) post office. This helped give an idea of who may have perished in the fire. Officials concluded that the fire gutted about 500,000 acres or 781 square miles. Ironically, only 14 days after the disaster one of the first acts was purchasing a fire engine – the building to house the machinery ended up burning down not too long after the engine was acquired.

Many were living and doing business out of a tent but life carried on. As early as September, 1911 the relief tents were being replaced with new buildings. Businesses were opening up again.

Within 18 months of the great fire, recovery was complete, the camp was reestablished, and a new town was founded.

Land clearing turns deadly in Porcupine fire of 1911
Jul 5, 2020 11:00 AM
Comments
We welcome your feedback and encourage you to share your thoughts. We ask that you be respectful of others and their points of view, refrain from personal attacks and stay on topic. To learn about our commenting policies and how we moderate, please read our Community Guidelines.