Let's look back at Timmins soldiers marching off to war

In this edition of Remember This, the Timmins Museum: National Exhibition Center looks back on those who left for war overseas in 1915
May 24, 2020 11:00 AM By: Remember This? 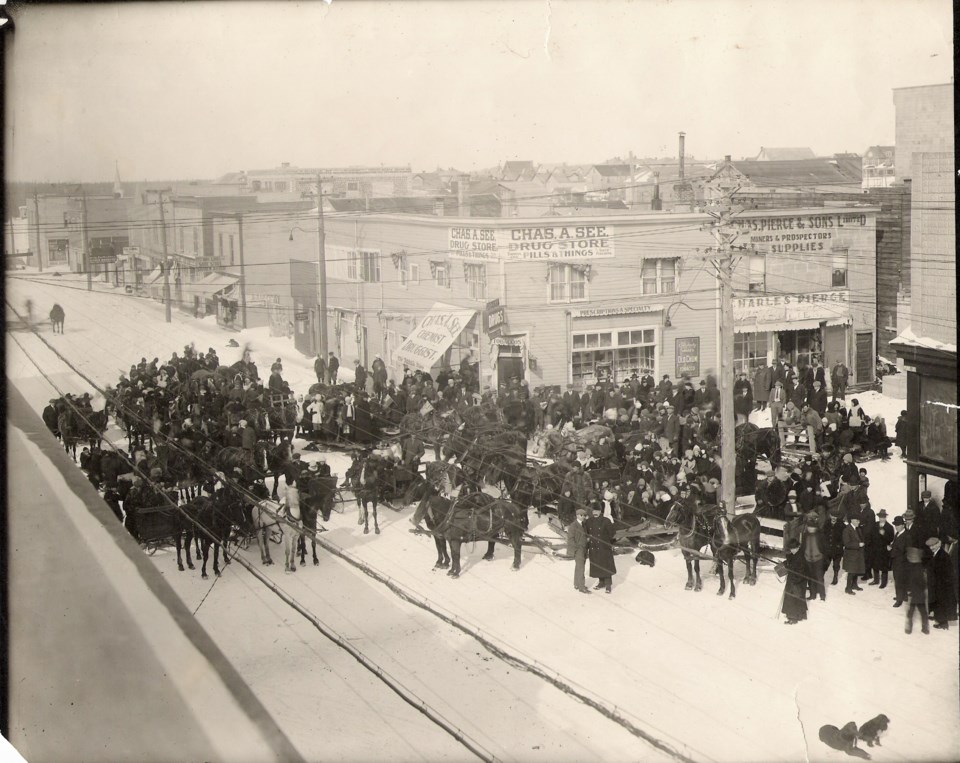 A crowd of people, with horses and sleighs on the corner of Pine St., in Timmins. Photo is taken from the top of a building, looking down.

The discussion of groupings of people has been a hot topic recently. Thinking of this, there is a photograph of celebration that comes to mind. This photo is also reminiscent of the patriotism and bravery of not only returning home from the First World War but also leaving for war.

The Porcupine Advance on Friday Oct. 22, 1915, describes the atmosphere the morning of Oct. 19, 1915 when the men from the 23rd Regiment, the Northern Pioneers, left for the war.

People from all over the area gathered in town as, “each street poured its quota of interested inhabitants into the stream of humanity,” and gathered at the railway station to say their last goodbyes. “It was about 11:35 a.m. when the boys marched out of the skating rink and took up their position behind the band, an a few minutes later the officer in charge gave the order to move off to which the boys responded by stepping out at a brisk gait…”

Spectators were excited and were described as, “…everyone who possessed a spark of patriotism felt like stepping into the ranks and accompanying the boys on their mission of liberty.”

They were given 15 minutes once they reached the train station to say their goodbyes. Some supporters walked through the crowds giving away chocolates, cigars, cigarettes, etc. – these gifts were greatly received. The crowd cheered loudly as the train left the station and the live band played the National Anthem.

Hollinger Hall: Historical hot spot for entertainment
Jun 7, 2020 11:00 AM
Comments
We welcome your feedback and encourage you to share your thoughts. We ask that you be respectful of others and their points of view, refrain from personal attacks and stay on topic. To learn about our commenting policies and how we moderate, please read our Community Guidelines.