In this edition of Remember This, the Timmins Museum: National Exhibition Center looks back on recruitment and jobs during the First World War
Nov 8, 2020 11:00 AM By: Remember This? 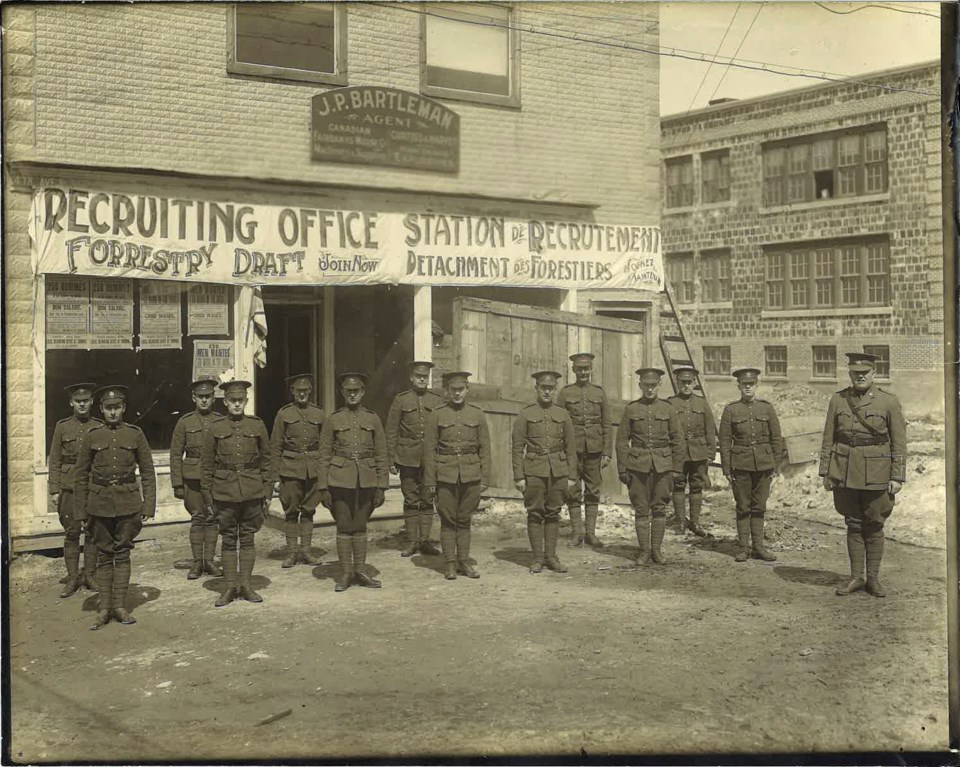 Thirteen soldiers and one officer stand outside the recruiting Office for Forestry Draft, in Timmins. Timmins Museum photo

The impact of the war was immediately felt the morning the war broke out. Men looked for the next thrill and adventure and joined up by the dozen.

Six hundred young men went to the trenches from Timmins. These men were mostly young and newly working rather than experienced professionals. The Porcupine Advance listed 100 men who joined the Pioneer Regiment’s 2nd Battalion and only six were identified professionals and merchants.

The men from the Porcupine camp could sign up in the Canadian Expeditionary Forces at J.P. Bartleman’s shop which served as their local recruiting bureau. The building was located in what is now the City Hall parking lot on the corner of Cedar Street and Algonquin.

Many of the first to enlist ended up in 58th Infantry Battalion. Many miners who enlisted became overseas-engineers or sappers. The 2nd Battalion, the Canadian Pioneers, called for miners familiar with tunnel construction; therefore, miners were extensively used along the front for their underground skills which became handy when digging tunnels was needed. They took on some of the most dangerous jobs which required long tiring days in the soil. One of their main jobs was to lay explosive charges under enemy territory to provide hidden access routes to the front lines under the battlefields of France.