Finally, Timmins gets a highway to the south

In this edition of Remember This, the Timmins Museum: National Exhibition Center looks back on our introduction to highway travel
May 31, 2020 11:00 AM By: Remember This? 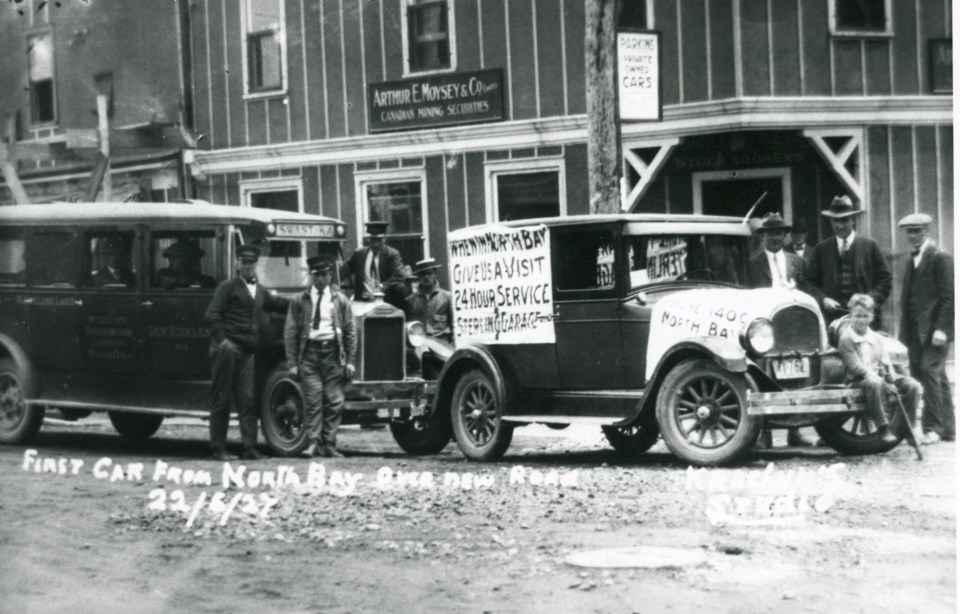 The first car over the Ferguson Highway on May 22, 1927 from Sterling Garage in North Bay. Also pictured: A bus from Swastika (McLellan), carrying seven men and one boy. In the background is Arthur C. Moysey & Co. Can. Mining, Swastika. Timmins Museum photo
From the Timmins Museum: National Exhibition Center:

In light of our daily trivia contest, this week’s article looks back on the opening of the Ferguson Highway and the celebration of passage to the south.

Leading from the Porcupine Goldfields to Toronto, a highway was finally completed. The Ferguson Highway officially opened in September 1927 — although some did travel earlier before it was officially inaugurated.

Approximately 1,500 people participated in the launch of the new passageway by driving their cars from Cochrane to the Canadian National Exhibition grounds in Toronto. The Ferguson Highway was the first road to link the Porcupine with southern Ontario.

By the time the highway was semi-passable, Leo Mascioli’s Timmins Garage Co. Ltd. was advertising round-the-clock service and a storage garage that could accommodate 95 cars.

Horses, however, were not phased out by the fire department until 1934. Because of the rough roads, automobiles made a slow appearance in Timmins, but as the city thrived the roads became better and better and cars became more visible.

People became so “motor-minded” that the car population rose to first place for the most cars per capita in Canada after the opening of the Ferguson Highway.

Hollinger Hall: Historical hot spot for entertainment
Jun 7, 2020 11:00 AM
Comments
We welcome your feedback and encourage you to share your thoughts. We ask that you be respectful of others and their points of view, refrain from personal attacks and stay on topic. To learn about our commenting policies and how we moderate, please read our Community Guidelines.