Robinson coming into his own as tournament season approaches 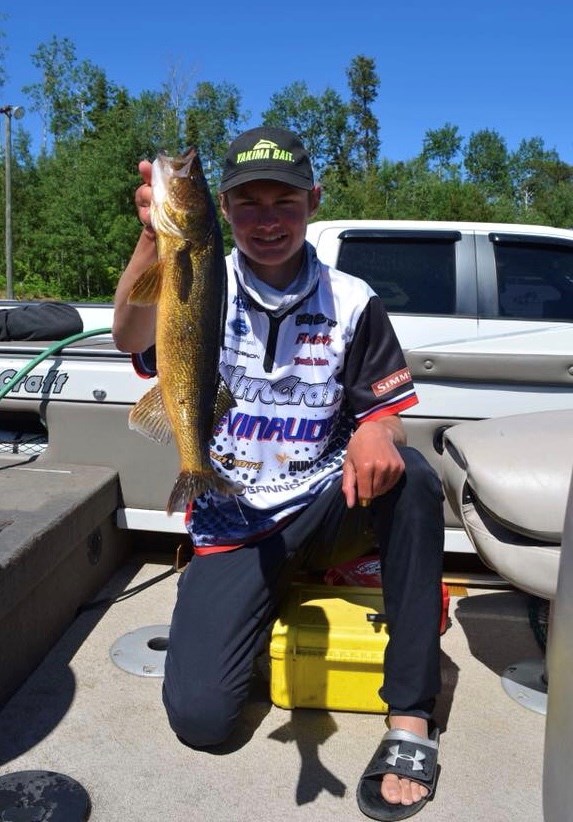 With the Northern Ontario Walleye Trail Championship coming quickly, I thought I would feature the three young anglers that qualified for the championship.

These three young anglers will competing against the other 22 teams of up-and-coming and seasoned anglers that have qualified for the NOWT Championship being held June 22-23 in Geraldton, Ont. on beautiful Kenogamisis Lake.

With this being the very first NOWT Championship, anglers will be competing for a prize package valued at $66,000 now, thanks to Princecraft Boats, Mercury Marine Canada and J&B Cycle and Marine.

Not only will Geraldton be hosting the NOWT Championship, they will be also celebrating their 30th anniversary of hosting the Geraldton Walleye Classic.

In turn, this means anglers not only have a chance at winning the championship grand prize but also Geraldton Walleye Classic first prize of $10,000 bringing the total prize to $76,000 should they win them both.

Many NOWT anglers had only dreamed of a NOWT Championship of this magnitude one day and to have such an opportunity at an young age must be very exciting for Brett Robinson, Cameron Racine and Mathieu Guenette.

The first young angler needs no introduction as many anglers have had the chance to watch him grow up in the NOWT by fishing some tournaments over the years with his father, NOWT six-time Angler of the Year Jamie Robinson.

Make no mistake, Brett has come into his own and qualifying for the NOWT last year, speaks volumes of his skills as you will see in this weeks article.

I like to introduce the first young angler, Brett Robinson.

Q: What year did you decide it was time for you to captain your boat?

BR: After fishing multiple years in Dubreuilville and Geraldton tournaments, I decided that I would start to fish almost every tournament through the NOWT in 2018. This is done with fishing with my partner Dylan Buckell and my father Jamie Robinson.

Q: How did you feel when you found out you made the NOWT Championship?

BR: At the start of the 2018 tournament season the end goal was to qualify for the championship. I was fortunate enough to keep myself in good position through every tournament to eventually qualify and attain that goal. This now presents me with a great opportunity to win an amazing prize package through the NOWT.

Q: Would you suggest fishing the NOWT to other young anglers and, if so, why?

BR: After starting at a young age fishing multiple tournaments a year, it gave me an opportunity to have a competitive side of fishing. In my opinion I would highly recommended youth participate in the NOWT in any manner. Whether it’s through volunteering or fishing the tournaments, these drove my passion for fishing to where I am today.

Q: Did qualifying for the NOWT Championship help you obtaining sponsorships?

BR: After qualifying for the NOWT Championship this gave me a couple new opportunities for sponsorships. Many people do not realize that no matter how good you are on the water, this does not mean you will get sponsorships. Placing high through every tournament sure helps, however it’s how you conduct yourself off the water and how you can promote their product which will get you sponsorships.

Q: Any thoughts on how fishing in the championship will be for you?

BR: After the announcement of the championship taking place in Geraldton, I don’t think there could have been a better venue to host along with the fishing. We have been incredibly lucky over the past ten years in Geraldton with numerous top ten finishes. Although I can not predict how it will be for us this year I hope that our luck continues and we can take home a prize of a lifetime.

I would like to wish Brett the best of luck in the NOWT Championship and look forward to competing against him and father, Jamie.

Be sure to watch for Cameron Racine and Mathieu Guenette articles coming next week.

Jake Pepin's advice for fishing, wear your sunglasses...even in the rain
Apr 18, 2020 9:30 AM
Comments
We welcome your feedback and encourage you to share your thoughts. We ask that you be respectful of others and their points of view, refrain from personal attacks and stay on topic. To learn about our commenting policies and how we moderate, please read our Community Guidelines.