From time to time I get asked what the Northern Ontario Walleye Trail (NOWT) is, how it started, what got me fishing it and why should they fish it. To answer some of these questions I reached out to NOWT Board director and President Mr. Cory Nephin.
David W. Reid Jan 18, 2015 9:35 AM 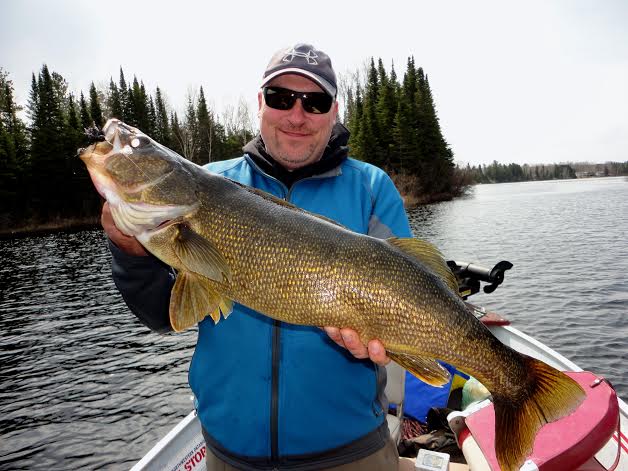 From time to time I get asked what the Northern Ontario Walleye Trail (NOWT) is, how it started, what got me fishing it and why should they fish it. To answer some of these questions I reached out to NOWT Board director and President Mr. Cory Nephin.
In 1993 I fished my first Walleye Tournament in Hearst, Ontario. I can still remember being in 99th place after day one. That evening I sat in my motel room retying spinner rigs for day two. After the end of day two, my partner Lesley Dunbar and I managed to win heaviest weight and biggest walleye of the day.
We went from 99th place to finish in 6th place overall. That was when I knew I was hooked on tournament fishing.
Walleye Tournaments started popping up all over Northern Ontario as the sport started to grow. Tournaments brought anglers into communities which in turn brought extra dollars to the local business during the summer months. These same tournaments also helped promote the host towns/cities as great places to travel to for summer holidays.
One angler named Marc Lauren seen a bigger picture as more tournaments started to pop up which drew not only local anglers to them but also other anglers willing to travel to the tournaments for a chance to compete against some of the best walleye anglers in Northern Ontario.
Seeing this Marc decided to start a Walleye Circuit called the Northeastern Ontario Walleye Circuit in early 2000's, with a point system. The points were given to an angler by the placing he/she had in a tournament and at the end of the season the angler that had the most points won the title of Angler Of the Year.
Over the years the Northeastern Ontario Walleye Circuit has grown thanks to many volunteering anglers taking over after Marc stepped down. One of the changes was the a change of the name to the Northern Ontario Walleye Trail. Today we see tournament anglers coming from all over Ontario and some from the U.S. to compete in these tournaments.
The following are some of the questions I posed to Cory that I get asked time to time, in which he agreed to answered.
*************************
What is the Northern Ontario Walleye Trail (NOWT)?

The NOWT is a walleye fishing tournament circuit that awards anglers points at each of seven tournaments. Events include Mattagami, Dubreuilville, Geraldton, Kapuskasing, Sault Ste. Marie, Mattagami Fall and Sagamok. Anglers receive points based on their finish in that event with their 3 best finishes in sanctioned NOWT events used to calculate their placement in the “Angler of the Year” race.  The NOWT promotes fish care at each of the events.  Each of the events on the circuit has its own identity and uniqueness.  The reasonable entry fee, great payouts and friendly volunteers at each event make the NOWT one of the most popular walleye circuits in Canada.  The NOWT boast over 1000 members.

The NOWT circuit is run by anglers for anglers and is designed to help anglers promote themselves, the member tournament communities as well as the sport of tournament angling in Northern Ontario. Everyone involved are volunteers.

When was it started?

The tournament circuit was started in the early 2000’s not sure of the actual date.  We have records from 2003.  I was not involved then and do not have any records from that time.  Marc Lauren started the circuit.

How is it run?

Anglers receive points based on their finish in that event with their three best finishes used to calculate their placement in the “Angler of the Year” race.  The points formula is calculated using your final placement in conjunction with number of teams entered.

Board of Directors make up?

Our title sponsor is Princecraft boats.  They have been with the circuit from the beginning.

Each individual tournament also has many local sponsors.

One of the keys to running a successful tournament circuit is the support we receive from sponsors. The operation of a tournament circuit of the quality of the NOWT requires the assistance of sponsors to continue, grow and improve.

Is there a 14-foot PrinceCraft Boat to be won t each Tournament and how are they  won?

PrinceCraft has generously donated and continues to donate a 14-foot Fisherman Boat to each of the events. They have also provided one for the AOY Award. The individual tournaments are ale to use these boats as they see fit.

Is there a membership cost? If so how much?

There is a membership fee that is paid by each sanctioned Tournament. Each event pays $500 annually.

What does the AOY win?

14-foot PrinceCraft Boat.  We also award cash for the remainder of the top five.

Now that the spring Mattagami Tournament is laid out differently, how would the points be rewarded?

Points for the Spring Mattagami will be awarded the same as every other event - team-ranked based on total two day weight. The NOWT can calculate this easily.

Is there anything  the NOWT is looking at this season. News, New Sponsors, etc?

Nothing to make public at this point.

I encourage anyone interested in fishing one of these tournament to Please visit the NOWT site at http://www.nowt.ca/ as the tournaments are now taking entries for the 2015 season.

A lot has changed since my first tournament in 1993. Back then their were only a handful of Sponsored Anglers at these tournaments where as today we see more Sponsored Anglers. This tells me that the fishing industry has taken noticed of the NOWT and the anglers that fish it.

As a tournament and sponsored angler I know how important it is for me to get any press I can get for myself and sponsors over the years.

In the earlier years everyone would give anything to get some press back then. Knowing this I would like to offer anyone interested in receiving some press  for yourself and sponsors to Please contact me at bungee001@hotmail.com to set up a time for an article. For those that are looking at some exposure in capturing a manufactures'  sponsorship, here is a chance to have something in writing to included for your resume.

Good Luck and looking forward to seeing you at one of these tournaments this season.

Please feel free to contact me via email: bungee001@gmail.com

This Sault angler cut his teeth on the Goulais River
May 3, 2020 9:00 AM
Reader Feedback