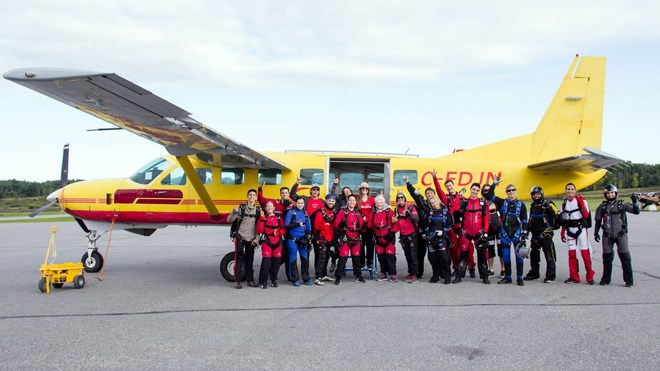 A photo posted by Go Skydive in Ottawa on Saturday morning, less than 30 minutes before a skydiver from Sudbury died when he crashed to the ground, shows a group of parachutists taking part in the Rockstar Boogie event ready to take off. (By Katia Filiatrault on Facebook.com/ParachuteGoSkydive)

SUDBURY — A 27-year-old Sudbury man has died in a skydiving incident in Gatinuea, near Ottawa on Saturday.

According to various media reports, the man died while performing a "wingsuit" jump near the Gatineau-Ottawa Executive Airport on Saturday morning. The victim's name has not been released.

He crash-landed in the backyard of a home a few kilometres from the airport. Found unconscious by rescuers, he was pronounced dead in hospital.

The man had been taking part in an event hosted by Parachute Gatineau-Ottawa Skydive (a.k.a. Go Skydive) called Rockstar Boogie, in which skydivers perform different types of jumps beyond simply falling out of a plane, such as group jumps in which the participants link together to produce geometric shapes.

Media reports have it that the victim was jumping in a "wingsuit," similar to a hang-glider, but worn on the body. Webbing that extends from the wrists to the ankles, and also between the legs to the feet, allow divers to glide at speeds exceeding 300 kilometres and hour and glide for several kilometres before deploying a parachute.

Go Skydive issued a statement in which it extends its condolences to the man's friends and family.

WATCH: Trudeau addresses racism and situation in US in daily briefing
Jun 1, 2020 4:14 PM

WATCH: Prime Minister Justin Trudeau to provide COVID-19 update
Jun 1, 2020 10:59 AM
Comments
We welcome your feedback and encourage you to share your thoughts. We ask that you be respectful of others and their points of view, refrain from personal attacks and stay on topic. To learn about our commenting policies and how we moderate, please read our Community Guidelines.