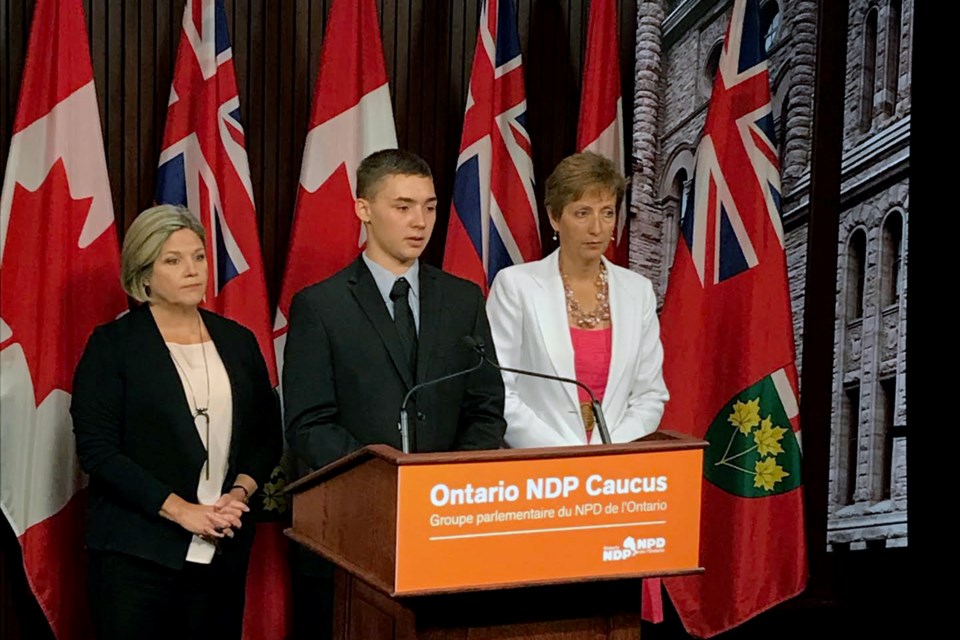 A Guelph teenager received a standing ovation in the Ontario Legislature on Wednesday in recognition for his efforts to improve the care people who have mental health challenges receive and to push for the creation of a national strategy for suicide prevention.

Noah Irvine made headlines last month when the Guelph teenager spoke out about the lack of response he received when writing a letter to each of Canada’s members of parliament stressing the importance of having a national suicide prevention strategy.

He was present during Question Period at Queen’s Park Wednesday, when he was recognized by the NDP and given a standing ovation from MPPs at the request of Eric Hoskins, Ontario's minister of Health.

Irvine said it was ‘pretty surprising’ to receive the ovation for his efforts when he was reached by phone Wednesday afternoon.

Even more surprising, said Irvine, was when Hoskins made his first direct contact with the teen, who was in the members invite gallery.

Irvine said he had written a letter to Hoskins months ago, as he did with many other elected officials, and never received a response.

“(Hoskins) has remained pretty silent on this. He came over and apologized that I didn’t get a response, (told me) I will get a response and that he wants to discuss ideas with me,” said Irvine.

The teen was in Toronto at the invitation of the NDP.

On Wednesday morning, Irvine stood alongside Horwath and NDP Health critic France Gélinas during a press conference asking for all-party support for a proposed bill by Gélinas which will have second reading tomorrow.

The proposed bill aims to create a ministry devoted to mental health and addictions in Ontario.

“I think it would be a monumental step in Ontario for quality of care for the mentally ill,” he said.

Horwath said she was impressed by Irvine’s knowledge on mental health issues, calling the teen ‘amazing’.

“(He’s) so thoughtful, so poised and a wonderful young man,” she said.

As leader of the Ontario NDP, Horwath’s office also received a letter from Irvine, as did the party’s Health critic France Gélinas.

“(Irvine) was disappointed I hadn’t responded, so then I did respond myself. I apologized for not responding earlier. Often these kinds of things we give to the critic, but I was happy to send a greet myself to Noah — first of all to offer our sincerest condolences on the tragedies he has had to deal with,” said Horwath by phone today.

Horwath said mental health in Ontario is in a crisis state.

In 2010, an all-party Select Committee on Mental Health and Addictions spent 18 months putting together a list of recommendations to address mental health in Ontario — recommendations Horwath said were mostly never put into place.

“It’s been seven years and virtually none of those recommendations has been implemented,” said Horwath.

Irvine accepted the invitation to speak at the NDP press conference because the proposed legislation is non-partisan and based on the work of the all-party Select Committee.

"This bipartisan Select Committee report addresses concern that I have and it was written seven years ago,” he said.

Guelph MPP Liz Sandals was a member of that Select Committee, as was Gélinas.

Irvine said he still has never received a response from Sandals about his efforts.

“I don’t think it’s great if other MPPs are recognizing your constituent. I think then you should wonder why they are doing that,” said Irvine.

The problems existed long before those recommendations were made in 2010, she said.

“The only way to stop this from continuing to fall through the cracks is to actually set up a standalone ministry so we can put the focus, the attention and the commitment to put together a system that helps people,” said Horwath.

Noah’s situation, having lost his 24-year-old mother to suicide when he was just five years old and the 2015 death of his 40-year-old father to mental illness, perfectly illustrates the problems in Ontario’s mental health and addictions system.

“He is taking his very his very tragic personal circumstances and turning that into a mission to change things for the better for everyone else, which is an amazing place to be for someone who is so young,” said Horwath.

WATCH: Trudeau addresses racism and situation in US in daily briefing
Jun 1, 2020 4:14 PM

WATCH: Prime Minister Justin Trudeau to provide COVID-19 update
Jun 1, 2020 10:59 AM
Comments
We welcome your feedback and encourage you to share your thoughts. We ask that you be respectful of others and their points of view, refrain from personal attacks and stay on topic. To learn about our commenting policies and how we moderate, please read our Community Guidelines.

About the Author: Kenneth Armstrong