CANADA: Less than 1 per cent of irregular migrants found to have serious criminal past

One of the most heated debates surrounding immigration has been whether or not asylum seekers 'pose a threat' to Canadian security
0
Sep 20, 2019 11:30 AM By: Global News 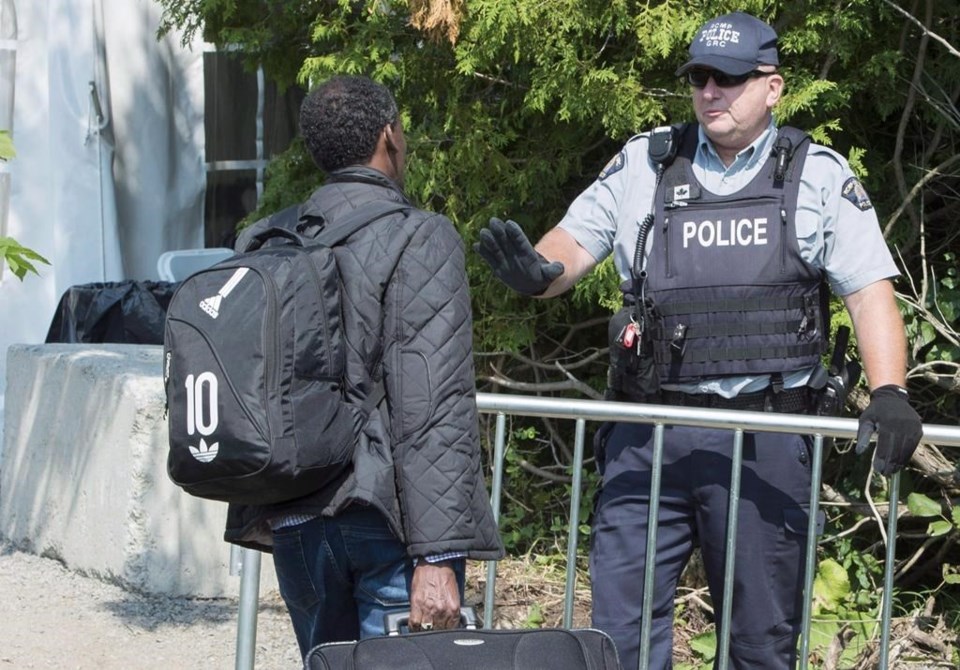 A lot of attention has been paid to the roughly 45,000 asylum seekers who began crossing into Canada in 2017.

One of the most heated debates has been about whether these migrants are “illegal” or “irregular” border crossers.

There’s also been a lot of misinformation – on social media, in the press and from government – about asylum seekers and whether they pose a threat to Canadian security.

But new data provided exclusively to Global News shows the number of migrants who entered Canada irregularly and were then found to have a serious criminal past is exceptionally low.

Only 30 irregular border crossers were blocked from making an asylum claim due to “serious criminality” since the government started keeping stats in 2017, according to Immigration, Refugees and Citizenship Canada (IRCC),

And the number of irregular migrants who entered Canada and were later found inadmissible due to serious criminality stood at 110 as of May, data provided by the Immigration and Refugee Board (IRB) shows.

This means that just 140 out of the roughly 45,000 irregular migrants who entered Canada since 2017 had a criminal past serious enough to stop the refugee process moving forward.

This represents 0.3 per cent of all irregular migrant claims.

“I’m not surprised by these statistics,” said Christina Clark-Kazak, a public policy professor at the University of Ottawa and an expert in forced migration.

What is ‘serious’ criminality?

In order for an asylum seeker to be ineligible due to serious criminality they must have committed or been convicted of an offence punishable by at least 10 years in prison or sentenced to at least six months in a Canadian jail. Offences do not need to have been committed in Canada.

Non-permanent residents may also be found inadmissible for some lesser offences, but this rule is not generally applied to asylum seekers because of the potential harm they could face if deported.

This means some of the remaining 99.7 per cent of irregular migrants could have criminal records, just not serious enough to stop a refugee claim.

In addition to those deemed ineligible due to serious criminality, 10 irregular border crossers were issued deportation orders by the IRB because of alleged connections to organized crime.

Ten other people were told they had to leave Canada because of possible threats to national security, while one person was given a removal order for alleged human rights violations.

Unlike serious criminality, being deemed ineligible for human rights violations, national security and organized crime does not necessarily mean the person was directly involved in any illegal acts.

Crossing the border is not a crime

Crossing the border irregularly for the purpose of making a refugee claim is not a crime.

Under both international and Canadian law, this act is a “justified” administrative offence – meaning there are no penalties and individuals cannot be prosecuted, Clark-Kazak said.

Craig Damian Smith, director of the Global Migration Lab at the Munk School of Global Affairs and Public Policy in Toronto, says there’s a good reason for this – refugees seldom have the choice to decide where they will flee in order to seek asylum.

And even when they do – such as when irregular migrants enter Canada from the U.S. – Smith says international refugee laws are crafted in a way that’s meant to help people in the worst situations.

To understand why this matters, Smith points to East Germany.

If crossing the border at an unofficial point of entry to make a refugee claim was illegal, anyone who came over or under the Berlin Wall would have been a criminal, he said.

Still, others have argued that the U.S. is “safe” for refugees and that anyone crossing the border irregularly should be turned back to have their claims heard there.

There are also people who’ve expressed concerns that irregular migrants pose a threat to Canada’s security.

For example, in April 2017, Jean-Pierre Fortin, head of the union that represents CBSA front-line officers, spoke of a “level of danger or potential danger, especially when … talking about people crossing at the border illegally” during an interview with the CBC.

Fortin made these comments the same week a CBSA officer was injured after being physically assaulted at an unofficial point of entry in Manitoba by an irregular border crosser with a serious criminal past. The man who attacked the officer was charged with several crimes, including assaulting a peace officer. He was deported in January 2018.

Nearly 50%of ILLEGALS have criminal records. How many of them are gang members? Are the extremely violent South American gang members MS-13 accepted as "refugees" in Canada? Trump wants them out, is Trudeau welcoming them? Canada, vote wisely in 2019 #Canada2019 #TrudeauMustGo pic.twitter.com/HIAAxQ5G0D

When he made his original comments, Fortin said about half of the irregular migrants who crossed at this checkpoint in the weeks leading up to the assault had serious criminal records. According to the CBC report, officials from the CBSA did not comment on this claim.

This didn’t stop people on social media and online from spreading these comments, using them to suggest that issues of serious criminality were far greater than statistics indicate.

The CBC article did not contain the specific number of border crossers officers reported having a serious criminal past. However, this week, Fortin told Global News the actual number of people he was referring to when he made these comments was very low – less than five, he said.

Fortin also said his comments were “blown out of proportion” and spun by the media and those online.

Barb Jackman, a Toronto immigration lawyer, says the way people view refugees has a lot to do with how governments talk about refugees.

Like Clark-Kazak, she believes “hyperbolic” language and derogatory comments about asylum seekers are political in nature. She also isn’t surprised that so few irregular border crossers have serious criminal pasts.

“I didn’t expect them to be criminals,” Jackman said.

“Most people are ordinary people who have left not because of crime, but because the conditions were not tolerable for them.”

Jackman also points to the fact that people with criminal convictions routinely enter Canada – even though they’re technically inadmissible – without causing any problems as a reason why Canadians shouldn’t necessarily be concerned when refugees have a criminal past.

For example, Jackman says a drunk driving conviction can result in someone being found inadmissible due to serious criminality. This is true even if no jail time is served and the person is unlikely to reoffend.

Between 2016 and 2017, the government issued nearly 1,200 temporary resident permits to people inadmissible due to serious criminality so they could visit Canada.

Unfortunately, Jackman said, many of the concerns people have about irregular migration are rooted in negative rhetoric.

“I think that a lot of the anxiety or angst about illegal migration is a political wedge,” Jackman said.

Fourteen per cent of respondents said it was among their top-3 priorities, with half of these people saying Canada accepts too many immigrants and roughly a third saying they are concerned about stopping people entering Canada illegally.

In January, Global News reported that another Ipsos poll found 54 per cent of Canadians believed Canada is too welcoming to immigrants.

Ipsos CEO Darrell Bricker said that Canada seems “reasonably” tolerable toward immigrants compared to countries such as the U.S. or France, but says the numbers suggest “we’re actually not that great.”

“Half of the population does have a problem with immigration,” he said, referring to the poll. “The interesting thing though is that it’s not necessarily about the immigrants themselves, it’s about the numbers of immigrants, it’s about the process we go through to accept people.”

This is especially true of irregular migration, he said.

Clark-Kazak says demeaning and defamatory language aimed at refugees is a main reason why so many Canadians feel this way.

Use of the terms “Illegal,” “asylum shopper” and “bogus” to describe asylum seekers feeds into the narrative that refugees, especially those who cross the border irregularly, are dangerous, she said.

Smith, meanwhile, says the claim that a significant percentage of irregular border crossers are serious criminals is “patently false.”

He also says some Canadian politicians and media pundits have turned to “populist” messaging on the issue of asylum seekers, such as when Ontario Premier Doug Ford attempted to blame refugees for the province’s long standing affordable housing shortage.

In general, Smith says, the government has done a good job securing Canada’s border with the U.S. He’s spent much of the past few months at the Roxham Road border crossing in Quebec speaking to hundreds of asylum seekers and says the scrutiny they undergo from law enforcement is rigorous.

One “mistake” at the border the government did make, Smith said, was introducing a new rule that blocks anyone from making an asylum claim in Canada if they’ve already made a claim in another country, such as the U.S..

According to Smith, this will likely lead to higher immigration detention rates as more ineligible people are apprehended at the border, plus more people being removed to potentially dangerous circumstances.

The government has, however, disputed these claims, saying anyone who’s not allowed to make a refugee claim will be given a pre-removal risk assessment to make sure they are not deported to a dangerous situation.

But some lawyers have questioned the constitutionality of this decision, saying it denies asylum seekers the right to a full hearing – a right the Supreme Court of Canada ruled in 1985 that refugees are guaranteed.

The decision was also criticized by former Liberal immigration and foreign affairs minister Lloyd Axworthy, who told the CBC in April that he was “really disappointed” with the government.

Axworthy also called out Blair for his “offensive statement” about asylum shopping, adding that it was wrong for a minister to speak about refugees this way.

“There is so much effort to put the onus back on refugees, as if somehow they are out there shopping to get in,” Axworthy said.

“They’re escaping: from terror, from violence, from starvation, from their families being persecuted,” he said. “Let’s just stop treating them this way and using that kind of language.”